In a Lonely Place by Dorothy B. Hughes 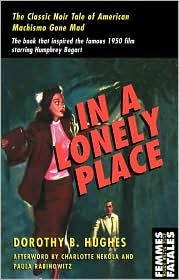 (This book was originally published in 1947.)

Oh, where to begin with this month's choice for the CT mystery book club? Maybe I should start by saying that I'm going to address two things. The first will be the book itself. The second will be the Afterward to this edition, written by Lisa Maria Hogeland of the University of Cincinnati. And a warning: SPOILERS. I hate spoilers, but I really can't avoid them with this book.

First, the book. Some of you may remember how I waxed poetic o'er Dorothy B. Hughes's The Expendable Man, so I was excited to read another book by her that I probably wouldn't have gotten around to until ... well ... ever (truth be told). I don't watch many movies, so I'd never seen the movie version of this book and had no idea what to expect. I'm glad about that, since the movie, apparently, differs significantly from the book and would have reinforced the preconceptions I had when I began to read (because, of course, merely not knowing what to expect didn't mean that I had no expectations).

The biggest expectation I had was that there would be some sudden surprise, a plot twist that I didn't see coming. That's what Hughes gave us in The Expendable Man (read almost anything that discusses that book -- including the Afterward to this one -- and you will, unfortunately, be informed of that surprise from the get-go. I, however, refuse to spill the beans. The whole brilliance of the novel is not knowing until Hughes is ready to tell you. Thank you, Persephone, for keeping it out of your ad copy). That means, despite being told from the beginning that Dix Steele was a murderer, I didn't believe it. (I guess if you've seen the movie, you'd approach this book with the same expectation, because he isn't in the movie version.) I kept waiting for the moment when All Would Be Revealed: he was a private eye, one step behind a killer but one step ahead of the police detectives, or he really was writing a novel, and again, was one step ahead of the police detectives in a way that would help them solve the crime. That's the sort of book I expected Hughes to write. If you read it with that expectation, you'll realize there's nothing concrete (at least nothing that I spotted) pointing to him as the murderer, nothing one can't "explain away" while waiting for the Big Twist to reveal itself. In hindsight, I suppose Hughes did that on purpose, wanting the reader to be unsure about whether or not this was a killer, since it's so rare to tell a murder mystery from the killer's point of view the way she did.

Well, I'm the fool. What is it I've heard over and over again from all wise fictional detectives? Even Brub Nicolai, Dix's former army buddy turned police detective, knew that the simplest solution is almost always the correct one. I was busy creating all kinds of alternative realities for Dix when his reality was right there in front of me, while he was confessing to me, even. He was seeking female victims, raping and strangling them, and he had a serial killer's ego, "Let's make this more exciting by socializing with the police detective assigned to my case. Will he ever catch All-So-Clever-Me?" What's interesting to me here is that Hughes, writing before the term "serial killer" had come into being, had the profile down pat (I know this, of course, because I've watched my share of episodes of Criminal Minds and have read my share of Thomas Harris books). Dix taunted the police. He was sure he was covering all his bases, and he was even more sure no one would ever catch him.

I'm twice the fool for having paid attention to the cover copy. Here, we read about the " ... luscious Laurel Gray -- a femme fatale with brains ... " Everyone knows that the femme fatale leads the good guy astray, not the bad, right? I read Laurel's character all wrong. Actually, I loved this clever twist on Hughes's part. The bad guy is actually seduced by a good woman who helps catch him. Maybe this was meant to be Hughes's Big Plot Twist a la The Expendable Man. If so, it was a letdown (but only because I know she's capable of so much more).

Basically, once the skeptic in me, who was never convinced some big surprise was actually coming, began to beat up on the optimist who kept waiting for it, I found myself disappointed by this book. All I could think was that it was a The Talented Mr. Ripley wannabe that didn't cut it. Except that it couldn't be, because it predates Highsmith's book (which leads me to wonder if Highsmith read Hughes and found herself thinking, "I could do that better").

I can't pinpoint exactly why I found The Talented Mr. Ripley to be so much better. Does it help if I tell you I didn't feel like I needed a bath after reading this one? I guess that means I never really empathized with Dix Steele; I never felt that Hughes helped to establish the fact that there just might be a killer in all of us, if only given the right environment and circumstances. Hughes kept Steele at a distance, which would have been a fantastic ploy if he'd turned out not to be a killer, but made the novel weaker, since he was.

This brings me to the Afterward, which makes a big deal of discussing how the reader is kept at a distance from Dix Steele, asserting this as proof of its being a protofeminist work. I don't know about you (and I know it's all the rage in academia to do such things), but I usually find it quite amusing when people try to impose 21st-century sympathies on anything written in prior centuries. Here, we have a "feminist" reading of In a Lonely Place. I'm grateful to this Afterward, because I learned quite a lot about Hughes, as well as how the movie version differs from the book, but, really, I can't recommend much else about it.

Lisa Marie Hogeland makes some mighty bold statements, like, "This particular psycho killer simply cannot be attributed to women, remarkable for a story written in the 1940s." Really? Has she read any Ross Macdonald (okay, he began publishing a couple of years later, but not much later, especially when you consider the fact that eras very rarely strictly fit into numerical definitions of decades)? Agatha Christie, even? She says "story" not "hard-boiled detective novel." Let's give her the benefit of the doubt and pretend she meant the latter, so Christie doesn't count. Even so, I know that's a pretty bold statement. I'm far from well-read when it comes to 1940s novels about psycho killers, but I'm quite sure there were novels written in the 1940s about psycho killers who didn't "get that way" because of some woman in their lives. (Although, I have to note that Patricia Highsmith fell into the "woman-who-made-the-killer" trap when she wrote her book.)

More importantly, though, my reading of the book is that she's wrong about this. No, it didn't happen as a result of some mean mother or other woman in his childhood, and, yes, he does have an overbearing uncle in his life, but, still, his need to kill can be attributed to a woman -- the first woman with whom he was ever in love, who was married to another man, seemingly broke his heart, and who was the first he ever killed. I would argue that (at least, according to most of the novels I've read/movies I've seen), if he'd been turned into a psycho killer by a man, he'd have been murdering men, not women.

I will admit, I was interested in what she had to say about violence, or rather, the lack of it here. I'd noticed that for a "hard-boiled" mystery, we got very little descriptive detail of the violence, nothing like what one expects from Chandler or Hammett or Macdonald. I'd argue, though, that this might have more to do with the fact that male writers of the genre and era had probably been exposed to more violence (even participated in violent acts) than a woman like Hughes had. These male writers could write about it more effectively and convincingly than women writers. My (perhaps biased and unfair, but maybe worth investigating) guess is that an educated woman from a certain class had spent a life relatively sheltered from violence. Truth be told: I'm a female who has witnessed very little real-life violence, has never been in a fight in which punches were thrown, and who does not feel very comfortable writing such scenes. Hughes and others may have been my mid-twentieth-century counterparts.

I'm not about to argue that what Hughes wrote wasn't a protofeminist work. I can tell from the two novels of hers I've read that she was definitely a woman who was ahead of her time, someone willing to tackle societal convention and so-called societal wisdom. All I'm saying is that we'd be wise not to jump to conclusions to prove such. We, really, have no idea exactly where she was coming from and what her point was, other than to make that point through a compelling story. My guess is that what some of us 21st-century feminists might say to her about this novel would make her smile and nod her head "yes." Much of what Hogeland had to say, though, I'm afraid would leave her scratching her head, saying, "Huh?" I prefer to try to avoid the latter and just to enjoy the fact that certain books have proved the test of time.