Now and Then by Robert B. Parker 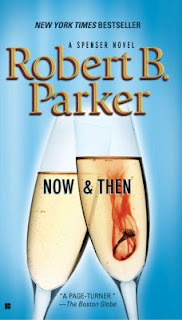 It's funny, the last CT mystery book club book was one in which a dead body doesn't make an appearance until page 60 or so. In this one, we have no dead bodies until page 70 or so. But the two books couldn't be more different. The Earl Derr Biggers, as I noted in that blog post, was a genteel read. If I hadn't known everything I was reading was leading up to some sort of mystery, I never would've guessed. Here, we hit the ground running, just waiting for at least one, if not multiple, murders.

I've been meaning to read Parker for years and am glad I now have. This wouldn't have been my choice for first of his to read, being the anal-retentive sort of reader who likes to start at the beginning of a series, but now I've had a taste of him and realize it doesn't really matter whether or not I read the Spenser books in order (that's true for most mystery series, but there are some for which it really does make more of a difference, like Jacqueline Winspear). Probably one of the reasons I've been reluctant to get started with this series is that Parker was so prolific, and I've feared it would take me forever to read through all the books. Silly worry. Now that I've read one, I'm aware that even a slow reader like me could probably plow through all 30+ novels without taking the better part of a year to do so, unless the others are very different from this one.

Much of this novel, which begins when a man hires Spenser to find out whether or not his wife is having an affair, is told through dialogue. That could be problematic in the hands of an unskilled writer, but it isn't here. The dialogue is good, and Parker doesn't waste your time letting you eavesdrop on a conversation in which one character explains something to another that should be perfectly clear (you've heard me rant against that elsewhere  -- see #7 -- here at Telecommuter Talk). No, Parker's characters talk to each other with the understanding that they don't need to fill each other in on background information. In other words, they talk to each other the way we talk to each other in real life. Parker's genius is that he manages to do so while also providing enough clues for the reader who may not know any of the back story to get up to speed. I like that. He's a good one to study for anyone interested in writing and improving dialogue (like me).

Anyway, as you might guess, this tale turns into one that's about much more than a wife having an affair. We've got FBI agents here and anti-government organizations and stolen identities. But I won't spoil it for those of you who haven't read it. I'll just assure you that if you're looking for a real page-turner (yes, I stayed up way too late one night because I just couldn't put it down), you won't be disappointed.

Spenser's an interesting character, and I was drawn into his relationship with Susan, a psychiatrist who also happens to be his long-term girlfriend and who plays a key role in the book. I'm gathering she's played a key role in others, as well. Although I enjoy P.I.s like Philip Marlowe who can't walk down the street without having multiple women throw themselves at him, I like coming across those who are involved in monogamous relationships like Spenser is. It adds a depth to their characters that makes them a little more human. Women apparently throw themselves at Spenser, too, but when he shows restraint, it's because he knows he's got something that means more to him than a one (or two or three) night stand, unlike a Marlowe, who does so for any number of other reasons (like the woman is just too pathetic). Spenser and Susan have obviously had their problems, but they're mature in their relationship.

Great beach read? Yep, and definitely a step above so much that falls into that category.