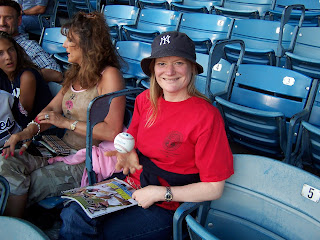 So, now, here we are in (the old) Yankee Stadium. Finally. It took us long enough to get here, didn't it?

This is a place Bob discovered when he was a wee lad (which is how this kid born in Dayton, OH of Cleveland Indian fans came to worship the Yankees). Bob's father, shortly after Bob was born, took a job as an attorney for General Electric, which meant many moves for the family throughout Bob's childhood. They spent four years in Queens, when he happened to be just the age at which most boys discover baseball: 3-7, I think it was, and (no matter that they eventually moved to Cleveland), his team was the Yankees and would be forever more.

Thus, now that we are at Yankee Stadium, you have to understand that we are accompanied by a little boy. He is very excited. He wants to get there hours before the game. He wants to walk around the park, maybe be there for batting practice (because, you know, we might catch a ball. We do happen to have a bag full of balls, somewhere, that have been caught over the years).

Today, the Yankees are playing Tampa Bay. We have arrived suitably early. We've had our ritual walk through Monument Park. I've bought my Cracker Jacks. Later, I will have my hot dog and beer. Bob has dragged me down with all the real little boys to watch the Tampa Bay players "warm up" for the game.

I am surrounded by cute, hopeful young men on both sides. They've got their gloves on. Some of them are waiting shyly, hoping for balls to come magically their way. Others are trying to draw attention to themselves, shouting out players' names. Soon, I begin to get bored. I have no glove. I have no interest in catching a ball. I (as always) have a book with me to read. I'm longing to go sit down and read until the game starts.

Yeah. Right. Me. The one balls have always hits on the head/in the stomach/anywhere that might knock her flat. Bob is very persuasive, though. Somehow, he manages to convince me to stay.

Within minutes, Jorge Sosa, pitcher for Tampa Bay, looks up into the stands. All the little boys around me hold their gloves out hopefully as they notice he has a ball in his hand. I watch the boys and hope one of them manages to catch it.

Suddenly, Jorge points at us. No, wait a minute. He seems to be pointing at me. Whoa! I look to my right and gesture questioningly at the little boy standing right next to me. Is he pointing to this guy? Nope. Jorge shakes his head and, decidedly, points right at me. Double whoa! I gesture to myself, and he nods his head up and down. Uh-oh. He plans to throw the ball to me. Will it hit me in the face? Will I break a finger trying to catch it?

You know, there is a reason these guys are professional pitchers. He tosses it gently up to me through the crowds, and (for the first time in my life, I am pretty sure) I catch a baseball. In case you are wondering what pure bliss feels like, I can tell you (just take a look at that photo).
Posted by Emily Barton at 6:16 PM

Oh well done! I've never caught a ball in my life, and certainly not under pressure! No wonder you were happy!

Nice story, Emily, it appeals to the little boy in me. I didn’t know that Bob lived in Queens for a while, where? I grew up in Richmond Hill, which is the basis of my own Yankee story. The most famous graduate of my high school was Phil Rizzoto (unless you consider Rodney Dangerfield or Cyndi Lauper to have greater eminence), and at one of the many Yankee games I’ve gone to over the years, we had passes to the Yankee restaurant where sitting at a table near ours was Phil Rizzoto and Bill White, Phil saying to Bill, “you Huckleberry,” and complaining “Holy Cow, I have a headache and we have to broadcast this game.” He turned to us and asked whether we had any aspirins, which, of course, my wife did and offered to him. So we chatted for a while. He thought he remembered my father who was also graduated from our high school at about the same time. I’m old enough to have seen the Scooter play as well as the Yankee Clipper and then of course the later legends starting with The Mick. I still love the game as much as I did as a school kid when I pitched, emulating my heroes then, Whitey Ford and Bobby Schantz. I am a lefty with a mean screwball.

What a fantastic story!

Litlove, it was a very rare thing indeed!

Nigel, and one more "awe" for good measure?

Bob, being asked by Phil Rizzoto if you had aspirin? That's a priceless story (and makes me think, "Better always remember to carry aspirin in my purse"). Bob lived in Fresh Meadows. And your pitch? I'm pretty sure I wouldn't be able to catch that one (although, believe it or not, I remembered that you're a leftie).

Sara, yes it's one of my favorites.

That was an excellent story. Were all the boys around you disappointed the ball wasn't for them?

I'm grinning as big as you were in the picture!!!

I love this story. I love the picture of you. Your smile? Priceless. Now the real question is: do you have the ball still, or did you give it to Bob to treasure on one of his shelves? After all, a NY Yankee threw it to you! Love how gently he did it, too.
PS I used to be a fervent Montreal Expos fan, back in the day when they existed. I mean, fervent. I know all about hoping to catch the ball!!

Stef, I think the boys were actually as amazed as I was that he picked me out of the crowd, and I felt a little bad for them, but not TOO bad.

Heather, glad you enjoyed it! You requested it a while ago, remember?

Susan, that ball is stationed on my bedside table. Bob has plenty of his own that he's caught over the years.