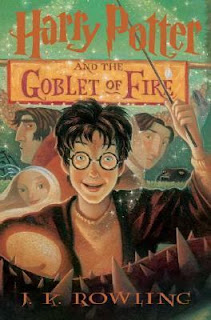 (I've decided it's about time I started catching up on writing about the books I've been reading for my TBR challenge. I'll be doing so for the next few posts.)

For some reason, I am determined to read through the whole Harry Potter series, despite the fact, as some of you already know, I have never been as enamored of it as so many others are. For some other reason (maybe because they were the only two fantasy novels in my original TBR list?), when I read this one, I had thought it might be interesting to follow The King of Elfland's Daughter with good old Harry. I was right: it was interesting. It was also a very stupid thing to do. One should never follow true, brilliant, fantasy with Fisher Price fantasy. Fisher Price just can't possibly live up to the real thing, and it is unfair.

One of the problems I've had with Harry Potter in the past has been getting into the books. We always have to start off with those tiresome scenes at the Dursleys, where we read of Harry's abuse and neglect until someone (or something) magical intervenes to get him out of there and off to Hogwarts. It was fine in the first book, but it felt old by the third (I know. I know. Children don't tire of that sort of thing, in fact like the comfort of familiarity, and these books are -- ostensibly -- written for children. Still. I am allowed to complain and also to wonder if other adult readers feel the same way).

I have to say, then, that this one got off to a very promising start. We were not immediately taken to the Dursleys. No. We were taken to some house where Lord Voldemort was hiding, and the stage was set for a mystery. I found myself thinking,

"Ahhh. I can see why so many of my friends have told me this one is their favorite."

But then, we had to be taken abruptly away from all that and sat down to eat with the Dursleys. I will say, Harry is taking better care of himself at the Dursleys than he did in the old days, but I was still inclined to yawn through this bit.

And then the worst happened: The Quidditch World Cup. I have been one who, throughout the entire series, could take or leave Quidditch. Like most sports, it and its focus make no sense to me. Usually, I just sort of gloss over those parts when Harry is doing whatever he does on that broomstick to win applause, but it was difficult to gloss over an event that took up most of the first 100 + pages of the book. Yes, there was much more going on than the game, but still, the word "tiresome" sprung to mind again.

Finally, finally, finally, we get to Hogwarts, and then, as always, I did begin to get into the book. Once she hits her stride, Rowling does get me turning pages, wanting to find out what's going to happen next. A good deal of it is fun. I do so love Hermione, Ron, and Harry and the way she plays them off each other. And with the reading of this fourth book, I have finally realized what she's writing. She's not really writing fantasy. She is writing mysteries disguised as fantasy, and she does a fine job of it.

So, what's my problem? Why don't I enjoy these books more than I do? Why do I not find myself in the "mad-about-Harry" club? I think it may be that her books never reach a point at which I completely lose myself enough that it all seems plausible. I find myself constantly looking for loopholes, so to speak, asking questions like,

"These people are all wizards and witches They can make whatever they want to happen happen. So how can Ron and his family be poor? Money and class shouldn't be an issue among full-blooded wizards." Or, "Really. Why aren't the Muggles more aware of all these wizards and witches in their midsts?" Maybe I'm just too much of a "classic" fantasist (if you can use that word to describe someone who doesn't write fantasy and doesn't even read much of it) for it really to work for me. I need alternate realities. I guess that's why I like Philip Pullman so much better. His Oxford is an alternate Oxford, not the one we know. To enter into other worlds from it makes sense to me. Hogwarts is an alternate reality, yes, but it's not the same, and the wizards are tromping around all over the human world, while the humans never accidentally wind up in Hogwarts.

In this particular book, Rowling also drops quite a few balls. I think she was trying to do too much, trying to do what fantasy has always done, which is to be a scathing commentary on reality. She just didn't follow through, though, and she is much better when she sticks to writing mystery disguised as fantasy than when she tries to comment on the world's injustices. The wizards, who have been observing Muggles forever, would be way too wise to enslave elves the way some of them apparently do. And the way Rowling tries to make us aware of how wrong it is -- through Hermione's crusades -- falls flat, especially when it seems to be nothing much more than a mere distraction. She also gives us hints here of political unrest and the problems of blindly following a leader, but again, not much depth.

My only hope is that she was paving the way for books that follow, which is, of course, why I must go on and finish out the series. I've heard the books do get deeper and darker. Perhaps she will cover some of these issues to my satisfaction. And if not? Well, like I say, when I am in the right mood for it, she does provide good page-turners with quite a few fun surprises. And I also have to give her credit for her ability to tap into the collective unconscious: I always have dreams full of Harry Potter-like escapades when I read her books at bedtime.
Posted by Emily Barton at 1:31 PM

My kids asked the same questions. I thought the next book was the best one. I'm not a huge HP fan, but enjoyed reading the books aloud to kids. Now I'm curious though about the book you compared it too--would you write a post on that one?

Lilian, quite obviously, your children are brilliant :-)! I did write about The King of Elfland's daughter, but Blogger has recently been refusing to let me cut and paste, so I can't give you a link. Try searching for The King of Elfland's Daughter on my blog or "You've Got to Read This." It should come up.