So, my brother Ian got married the weekend before Thanksgiving in Dublin, VA (a place I'd never heard of, but which was very appropriate, seeing as he and Cara nearly got engaged in Ireland when they were over there last summer). This was an extremely exciting event in more ways than one. First, it was exciting because he has chosen a wife who fits right into the family. As he's noted, he's finally found his match when it comes to humor. They can most definitely go head-to-head on the humor field (although I wouldn't put it past her to outwit him on occasion. That's quite a feat!).

Second, it was exciting because they honored Bob by asking him to officiate. (We have learned not to say "marry them," as those who aspire to be humor pros like the bride and groom keep telling us, "That's not legal.") This honor turned out to be quite a lot of work. We should have guessed, being Presbyterians, that for a minister to leave the state of Pennsylvania in order to officiate a wedding in the state of Virginia would be about as easy as swimming from Manhattan to San Francisco. However, we didn't, which means Bob didn't finally have the document that allowed him to perform the ceremony until the day before the wedding. (No matter. Ian didn't have his tie -- ordered six weeks earlier, to match the best man's and the ushers' ties -- until the day before the wedding, either.)

Third, Ian had asked my father to be the best man. This was another honor not taken lightly. My father was nervous about dropping the rings and having them roll through some sort of crack and disappear (they got married in this very cool converted barn that is part of the Rockwood Manor Bed and Breakfast). I was more worried that our 81-year-old father was going to fall going up and down the stairs to the riser. Luckily, Cara's sons were ushers and offered him helping hands.

Fourth, this was the first time my entire family has been together in four years (by entire family, I mean my parents, two sisters, brother, and two nieces. I have to clarify this because one of my English cousins who came over for the event had informed us that her sister has recently discovered that we're somehow related to Hugh Grant. When we were talking about how it had been four years since we'd all been together, one of my nieces, without missing a beat said, "Define family. I mean, I want to know: are we talking Hugh Grant here?"). Believe it or not, we made it through the whole weekend without a single disagreement or argument (if you ignore my parents' typical bickering, which we all do). That's rare in my family. Either we have finally all matured (highly doubtful), or we were just all so happy and having such fun, nothing seemed worth arguing over.

Finally, I got to see people I haven't seen in years. And I actually got to talk to them, not just wave to them from across a room while someone I didn't know at all bent my ear for hours. It's amazing, though, how we've all come to resemble our parents. How did that happen?

All-in-all, it was a great success. Bob did a beautiful job (not to brag, but I will anyway and say that my husband really has a knack for things like weddings and funerals -- the latter of which caused us to have to race home, so he could be with a grieving family and officiate the day before Thanksgiving). One of our friends said to Bob, "If my daughters ever get married, I'm calling you." My father held onto the rings until they were masterfully exchanged by the bride and groom. And then we all ate the best. wedding. cake. ever (BTW, if you want really, really fantastic food at a wedding -- not that typical, bland, tasteless stuff that always seems to be served, no matter how fancy the caterers -- make sure the groom is a former chef) and danced the night away (helped along by a secret stash of moonshine, or as my English cousin called it "homegrown." After all, it was a Southern wedding. As if all the other booze weren't enough. Like I said, after all, it was a Southern wedding. It was also a Scottish/Irish wedding).

Most of my pictures of the actual wedding didn't come out all that well, but I share a few here with you. 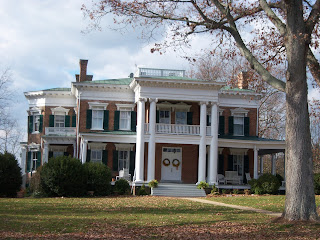 The beautiful setting in Dublin, VA. 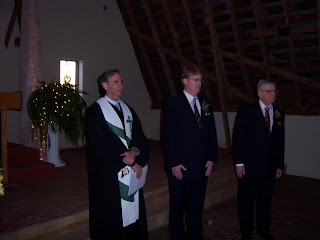 The minister, the groom, and the best man await the bride. 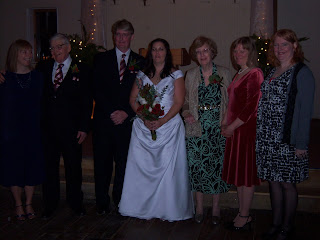 My immediate family with the newest member. 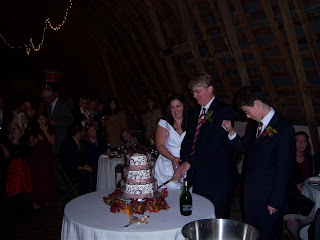 Cake cutting (that's the bride's son taking a picture).
Posted by Emily Barton at 6:45 AM

congrats to Ian and Cara! It sounds like a wonderful wedding...I know how you feel. It makes me sad that our family only really gets together for weddings and funerals...I wish we could do so more often. But oh, do we make the best of those weddings (and, if I am being honest, funerals)...

Sounds like a wonderful time! And that cake does look pretty tasty.

Sounds incredibly fun, Hugh Grant is a fool for missing it! I'd like more details on the food, please. And I still miss Ian's blog--make him start writing again.

Thanks, Court. Yes, my family makes the best of weddings (and funerals) as well.

Stef, it was very tasty. I should have had two pieces.

Danny, well, you know, Hugh is the Black Sheep of the family. I wish Ian would blog again, too. I'll keep bugging him.

It sounds wonderful, Emily. Danny's comment made me laugh - I was going to say something about Hugh but he beat me to it, and brilliantly, too.