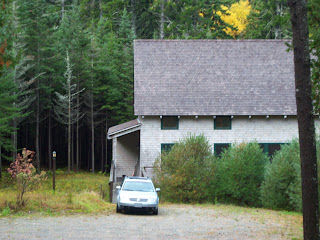 So, we went to Maine right after Christmas. This is a picture of our home in Maine, taken last fall (yes, I said our home. Once we get it fully furnished, please come visit. Or come visit now, if you like to camp. This is where, God willing, we will one day retire). My plans had been to write, read, snowshoe, and cook up a storm right through New Year's. My body had other plans. I developed a bad chest cold right before Christmas, which you all know from my previous post turned into walking pneumonia. I spent my time in Maine sleeping and reading and mostly eating things that came out of cans. However, that means I got a lot of good reading in. I thought I'd share it with you.
The Late, Lamented Molly Marx by Sally Koslow
Thanks go to Zoe's Mom, who lent this book to me. I actually had almost finished it by the time I got to Maine, but I read the last 25 or so pages there. This was an extremely well-conceived ghost story. Molly Marx is dead, and although it seems like her death was accidental, the more we read, the more we come to find that it might not have been so accidental after all. Molly observes from the afterlife (here, cleverly called the Duration), and what we get is not only a mystery, but also a fascinating study of marriage and love and family relationships. It's both funny and sad -- and there are moments of brilliant poignancy, like when Molly observes her young daughter dealing with her mother's death (I can't imagine a mother reading that section and remaining dry-eyed). Oh, and a big plus is that it takes place in Manhattan. Molly even happens to die in Riverside Park, my old stomping grounds. Highly recommended.
My Family and Other Animals by Gerald Durrell
I've actually been reading this book for something like a year, having read it once years and years ago. It's one that can easily be picked up and put back down and not picked up again for ages, as each chapter (once you've been introduced to Gerry's family) is pretty much a discrete piece of writing. I liked reading it this way, because it's a book to be savored. If you love wild creatures and funny family stories, you can't get much better than this book about a young boy whose family moves to Corfu from England and all the adventures and misadventures he and his family have. An added plus is that Gerald happens to be Lawrence Durrell's brother (Larry). If you've ever read Lawrence, Gerry's descriptions of him are even more enjoyable (although I couldn't help wondering if Larry ever forgave him. If the critics considered me to be a serious author, and a sibling portrayed me that way, I might have a little trouble doing so). Anyway, so very funny. Highly recommended.
Faithful Place by Tana French
I found this one to be very different from her other two. On some levels, it was a more straightforward whodunit than her first two. I pegged whodunit almost immediately, so then it became much more of a how and why than a who, and French didn't disappoint in those two regards. More than a whodunit, though, it was an Irish family saga. I haven't read Edna O'Brien in years, but if you take out the murder part, this sort of made me think of a male O'Brien (because we get inside a man's head here, not a woman's, which, if I remember correctly, is typical of O'Brien). I found that interesting, considering the author is female. Typical of French, I couldn't put it down (maybe I should blame her for my staying up too late and not getting sufficient rest to fight my illness). She can do no wrong in my book. Highly recommended.

The Sound of a Wild Snail Eating by Elizabeth Tova Bailey
Okay, this probably wasn't the best choice for someone who has a slight tendency to be a bit of a hypochondriac to read while suffering from "flu like symptoms" -- anyone ever notice how some of the world's worst diseases begin with "flu like symptoms"? Bailey suffered such symptoms herself when she was 34, only to discover her body was actually being attacked by some pathogen that has affected her autonomic nervous system for nearly 20 years, most of which, I gathered, she has had to live in a prone position. Still, this book about her year with a "pet" snail and its offspring who live by her bedside is a work of lovely writing and fascinating facts about snails. I will never again eat escargot. An added bonus is that she quotes a passage from Durrell (from one of his other books, not from My Family and Other Animals, but that doesn't matter). Highly recommended.

Settled in the Wild: Notes from the Edge of Town by Susan Hand Shetterly
(By the way, this and the previous title are both Algonquin books. That means they are extremely visually and "tactile-ly" pleasing.) Shetterly and her husband were some of those "back to nature" types who came along in the 1960s and 1970s. In 1970, they decided to leave their suburban lives and to move with their young son back to the land in Maine. Eventually, they also had a daughter, and then they got divorced, all of which we find out in this part-memoir, part "science notebook" (for lack of a better term). I find it interesting how many people choose Maine for their "simpler lives." I love the place, of course, but it's such a harsh climate, no way would I want to live there without electricity the way this family did for a time. I enjoyed this book mostly for the fact it was about Maine and mentioned places I know and love, and I liked learning about some of the animals and birds she describes. However, Shetterly strikes me as someone who would be too serious and earnest for my tastes were I to meet her in person. Recommended. (But if you want to read a truly superb "back to the land in Maine" book, I recommend you read Louise Dickinson Rich's We Took to the Woods instead.)

Emma by Jane Austen
Thanks again to Zoe's Mom, who gave me the lovely new Penguin Classics hardcover edition of this for Christmas. I didn't actually finish it while in Maine, as I didn't need to, because I know how it ends. It's a rare book that could be more of a comfort to me than Emma, and she has certainly helped nurse me back to health. And now I want to race out and get all of Austen in these editions. Again, such a visually and tactilely pleasant reading experience. Highly recommended.

The Book Thief by Markus Zusak
I hardly read any of this in Maine (Bob was reading it, because it's our book discussion book this month), but I did start it while there. I'm now about halfway through it and kicking myself for having refused to read it for so long because it's been so popular. It's so much better than I was expecting, and I am very eager to find out how it turns out (it made Bob cry, almost always a good sign when it comes to books). Highly recommended (so far).

That was a pretty good start to the new year, reading-wise, huh? I only read one thing that I wouldn't highly recommend. How's everyone else's reading year begun?

Not a bad start at all! I'll have to look for Gerald Durrell's books. I've got Tana French's latest in my stack from the library last night.

What a lovely start to the year's reading! I only know the Durrell (which I have but haven't read since schooldays) and the Tana French. I have The Likeness by her which I keep meaning to get to. The others are new to me, and I'm really intrigued by the one about the snails - can't decide whether it would cheer me or depress me!

I'm still "finishing" Finishing the Hat -- Sondheim's record of his career (part one). It includes all his lyrics but as importantly his comments on the Broadway stage in general. He writes both (lyrics and comments) brilliantly.
http://lacunaemusing.blogspot.com/2010/12/finishing-hat.html

Your house looks amazing. I would love to visit one day.

Hope your health is picking up. My reading year isn't too stunning so far. I just read Joan Collins's autobiography which was not earth shattering (though I was somewhat interested to read she had a relationship with Warren Beatty before he was famous)

So glad I could provide you with some good vacation time reading!

Your house looks fantastic. I can't wait to visit!

Yay! The house looks great, and you know, of course, that I plan to visit as soon as we can possibly make it happen!

How fantastic to have a house in Maine. We think our August vacation this year might be another visit to Maine.

At least your reading year is off to a good start! You Maine house is lovely. I'm glad to hear The Sound of a Wild Snail Eating is good. It's on my tbr list. And so glad you are enjoying Book Thief. I loved it. Have the tissues handy when you get about 50 pages from the end. It's a soaker.

Litlove, you'll like The Likeness. Although I can see why you might want to avoid it, I think the one about the snail will ultimately cheer you. The woman has some wonderful insights.

Bob, yes, that one has been added to my TBR tome. Glad you enjoyed (and finally finished!) it.

Amanda, please do come. I never knew Joan Collins had anything with Warren Beatty, either.

ZM,I can't wait for you to see it in person. And thanks again for the books that helped me get through my illness.

Thomas, where in Maine? This is up right near Acadia National Park (actually, we can walk to the park).

Stef, you and Mr. Bookman will also have to come visit Maine. Hmmm...maybe I need to have a blogger meetup at the house in Maine. Wouldn't that be fun?

So I've added the ghost story to my to-Get list already, you are the second person to write about Gerald Durrell this week! I read his animal books long ago, looooong ago! and I think it's time I revisited them,now that I know as an adult how crazy life can be really (and dysfunctional most families really are. I prefer animals too!)

I have The Book Thief too on my shelf TBR.......I must read it this year! I'm avoiding the crying though.....and now I know I must read Faithful Place as soon as possible - an Irish family saga, with a mystery, who can resist? I can't!!!

I'm glad you are feeling better (as I write this we know you are better!), and at least you got some good books read. That's a holiday too :-)