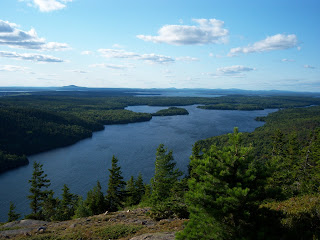 Oh, how hard it is every time we go up to Maine to come back, but it is especially hard when I come back to a miserable heat wave in Pennsylvania. And, yes, the heat wave has hit Maine, too, but it's a little different there. For instance, at 7:00 p.m. last night, it was 93 degrees here. In Maine, it was 75 degrees. One good thing about the heat wave, though, is that it's given me an excuse to sit inside (can't risk sun burn and heat stroke, you know) and read such taxing fare as Lisa Jewell.
Despite the heat, I'm settling back in here, now that it will soon be a week since we left, and I'm happy to be back in the Land of the Best Corn Ever, as well as to be able to do things like buy my milk and eggs right off neighboring farms. I'm also looking forward to dinner with friends this evening and (I'm hoping), a "girls' night out" soon. Having just spent two weeks with nothing but the boy, a dachshund, and a cat (BTW, the latter two love Maine as much as we do, it seems), I need a little feminine companionship. I do wish, though, that the girls and I could go to Joe's Smoke Shop in Bar Harbor together (maybe, one day...).
Still, I'm reminiscing about the lovely time we had and thought I'd share some numbers with you:
# of blog posts that successfully posted themselves while I was away: 4. We don't have Internet access in Maine, and I'm no good at using the Blogger app for posting blog posts. I didn't, however, want to leave you, my faithful readers, with nothing to read for 2 weeks, so I scheduled things to post while I was away. Happy to say that it worked.
# of magnificent 4th of July fireworks displays I saw: 1. Bar Harbor shoots them off right over Frenchman Bay, and it was stunning (even when mist began to roll in towards the end. It gave the lights a certain sort of mysterious glow).
# of miles hiked: 33.88. This would have been closer to 50 if I hadn't been quite lazy a good deal of the time.
# of Scorned Woman martinis drunk at Joe's Smoke Shop in Bar Harbor: 3 (not all in one night).
# of blueberry martinis drunk at Joe's Smoke Shop: 1. Then I discovered the Scorned Woman martinis (not for those who can't handle spicy, spicy hot, but Bob and I loved them).
# of books finished: 1. "Only 1?" you very well may be asking. Yes, only one (A Coffin for Dimitrios by Eric Ambler, for those who are curious). You see, just before we left, Bob convinced me to bring George R. R. Martin's A Game of Thrones, which is well over 700 pages long, and I'm a slow reader. It's a book I'd highly recommend reading a. right after reading Josephine Tey's The Daughter of Time and b. in between long hikes over mountains and through forests.
# of times I went to Beech Hill Organic Farm to buy delicious produce and yogurt: 3
# of fabulous blueberry and chocolate chip pancakes I made by stepping out the door and picking wild blueberries: 12
# of times I planned to go swimming in Long Pond: about 12?
# of times I actually swam in Long Pond: 1. I don't know why I didn't swim more, maybe because I was too busy reading A Game of Thrones.
# of chapters revised and edited in my novel: 3. We're getting there. I hope to have a readable draft by early fall for anyone who's interested in reading it.
# of new novels begun: 1. This was a complete surprise to me. I planned to work on the second draft of the already-written novel and some ghost stories, but one day, I was hiking a trail, and this whole new novel (not related to anything I've written or thought about until then) started demanding my attention, so I sketched it out a bit and even began writing the first chapter.
# of cigars smoked: 2. This is something I only do when on vacation, and I typically smoke the little, thinner, more "feminine" types of cigars like Acids.
# of pink flamingos spotted: countless. It was "flamingo days" in Southwest Harbor (apparently, the guy who invented the plastic pink flamingo is from Southwest Harbor), and we went to the parade.
# of loons spotted: 5.
# of snakes spotted: 2.
# of beaver dams spotted: 1.
# of porcupines spotted: 0. I'm convinced I'll never see a porcupine.
# of moose spotted: 0. I'm convinced moose are just legendary figures, like Big Foot.
# of months till we go back: 3. I think I can survive 3 months without a fix. We'll see...
Posted by Emily Barton at 1:42 PM

Sounds like a great vacation too! Don't worry, I've never spotted a Parisian porcupine and a French moose either. Urban myths?
Sorry to hear about the heat wave. Here in France, we were stuck with cold rain days for most of July with as low as 60F whereas it should be at least 80F (I've been using a conversion site it's great!). We've pulled out our spring sweaters and I'm quite fed up with this un-summery weather!

Everyone is reading Game of Thrones! I saw the book for the first time yesterday at the supermarket and flicked through it. It seems to be fantasy, yes? I wish I liked fantasy more. Maine sounds like it was wonderful, though, and I hope it cools down where you are very soon!

The loon count is strictly birds?

Sounds fabulous! I think 33:88 miles hiked is pretty good considering the rest of the fun that you clocked.

Litlove, yes, it's fantasy, and it seems like just the sort of thing I wouldn't like, and yet I was almost immediately engrossed. It's very well done.

Carrie, oh, yes strictly birds. Otherwise, it would be much higher!

I love blueberry and chocolate chip pancakes! Moose are not myths. I have seen lots and lots of them in Yellowstone. Perhaps all of the Maine moose moved there? And I have to beg to differ about where the best corn ever grows. Everyone knows it is in Minnesota. Even Garrison Keillor says so. He even said that it was better than sex. And while I quibble with him on that point, the corn here is pretty darn good :)

I have to disagree with you about moose, because I've seen a couple, although it was in Vermont, not Maine. Maybe Maine moose are mythical? Your picture of Maine makes me want to be there!

Dorr, we're even then: your pictures of Ireland and England earlier this summer made me want to be there!

We just got back from two weeks in Maine on Saturday so I know what you are going through. Lots of Maine-related posts coming up.