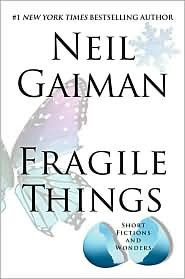 Pages from a Journal Found in a Shoebox Left in a Greyhound Bus Somewhere Between Tulsa, Oklahoma, and Louisville, Kentucky

How to Talk to Girls at Parties

Week seven, already, for the group read of Fragile Things. Then again, it may seem like it's been forever for those of you who realize I've posted on nothing else in the past seven weeks. Oh well, only one more week to go, and then we'll get back to blogging about other things.

In the End
Being the wife of a minister, and being someone who, along with that minister, knows that humankind has a responsibility to care for creation, not to destroy it, I found this "going back to Eden" tale fascinating. What a wonderful, imaginative concept, the man and woman returning to the garden. The touch of man taking away each animal's name, as if he has no right to name them, is magnificent to those of us who know that the sacred (e.g. God) was never to be called by name.

Goliath
I'm pretty sure this one wouldn't have made any sense to me at all had I not seen the movie The Matrix. As it was, I saw the movie so long ago that I had to do a bit of thinking and piecing together to make it make sense. A bit of work, but I came away from it really liking it. I can't help making the connection to Corporate America. After all, doesn't the following quote sound like someone who's just retired from a cushy, corner-office job at G.E., say, a company that took good care of him, allowing him to support a family and send two kids off to good colleges?

They may be heartless, unfeeling, computerized bastards, leeching off the minds of what's left of humanity. But I can't help feeling grateful to them. (p. 248)

Pages from a Journal Found in a Shoebox Left in a Greyhound Bus Somewhere Between Tulsa, Oklahoma, and Louisville, Kentucky
Meh. I loved the title, but this one just did nothing for me. I did, however, like the fact that one of the journal entries is dated "Friday the 32nd."

How to Talk to Girls at Parties
If his children's books make us realize Gaiman certainly remembers what it was like to be a child, this story makes us realize he also remembers what it was like to be a teenager. His sense of humor shines brightly in this wonderful tale of teenage insecurity in which one boy (our narrator) attends a party with his friend Vic. Vic is the sort of guy who has success with all the prettiest girls at parties while our narrator Enn gets stuck talking to mothers in kitchens. Although I was a girl, that's a very familiar story from my own teenage years. Anyway, Enn tells Vic that he doesn't know how to talk to girls, and Vic chides him, telling him they're just girls. But are they? I love the girls in the story and the conversations Gaiman dreams up for them. I also love wondering, what, exactly happened to Vic in that upstairs room.

I may or may not get around to posting about the last week's stories next Sunday. If not, I promise to write about them as soon as I can.

Although my response to In the End comes from a non-religious viewpoint, I think we both found the same things to value about it - I hadn't considered the Jewish non-naming of God as an element relating to the animals' names, thank you for pointing it out. I very much like the lesson about responsibility that you infer from it. This story was the first time that I had felt Gaiman's Jewish/scientologist background gave him a different angle on the creation myth - funnily enough, I wasn't as aware of it in the Susan story, despite the potential of that one to ruffle feathers (including my own).

I am really thinking I am in the minority for really not liking How to Talk to Girls at Parties... If I ever catch-up on my Google Reader I will get my post up!

I didn't enjoy Girls as much the first time I read it, but boy was it good the first time I heard Gaiman read it. Gaiman does do a great job of capturing that awkward teenage opposite sex drama, doesn't he?

I love what you wrote about In the End. Viewed that way the story is much more interesting than what I have gotten out of it each time I've read/listened to it. Still not a fan of it, but that is a very interesting way to look at it.