About Time by Simona Sparaco 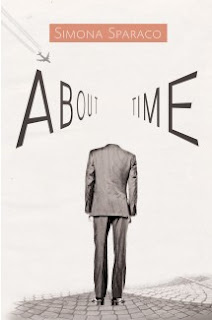 One of the wonderful things about blogging is that, every so often, some terrific independent publisher stumbles across your nearly dead blog, decides that you write reasonably well about books, and offers to send you a book to review so that you can breathe some life back into the blog. Such is the case with Pushkin Press, and, man, what a way to breathe life back into this blog! Pushkin Press is a terrific publisher that is putting international material into the hands of the likes of me. This is the second book they've sent me, and all I can say is, "I am certainly one lucky gal!"

Let me start by saying that I closed the book, turned to Bob, who was reading some minor work that couldn't possibly compare  and said just that, "Wow!" I then went on to say that this book is a masterpiece, the sort of book that rarely gets published today (at least, not by The Big Six publishers). I loved it for being one of those books that I can't believe is only 183 pages long. By the time I'd finished it -- which didn't take long, so riveting it was -- I was convinced I'd read some chunkster. The book is so much: parable, romance, father-son domestic tale, dark fantasy, odd sci-fi time travel, comedy, tragedy. Really. I'm not kidding.

I don't blame you if you're thinking, "All that can't possibly work in such a short book." I'd be thinking the same thing if I hadn't read it, but I have, so instead I'm thinking, "My God, how did Sparaco manage to pull all that off without my wanting to throw the book across the room in disgust, upset that I've wasted time with an author who was trying too hard to do too much while being terribly clever?" The only answer to that question is that Sparaco is a genius. I want to eat dinner with her -- actually, no I don't. I'd be too intimidated.

So, what's the book about? It's about Svevo Romano, the kind of man I hate. Maybe he's too much of a stereotype, but that's okay (after all, male writers have been stereotyping female characters for centuries. Why shouldn't female writers retaliate with a little stereotyping of their own?). He's Mr. On Top of His Game at Big Corporation. He uses and abuses women, women who are much younger than he is. Booze and cocaine are a way of life for him but not so much so that they interfere with his ability to work. He's got tons of money, which is why he lives in a fabulous, meticulously decorated apartment that has a glorious view of Rome.

Romano is a house of cards. Blow on him, and he'd scatter, but no one seems to know that. In case my description doesn't do enough to help you picture a cocky, middle-aged egoist, listen to how he talks to Father Time (with whom this whole book is a one-sided conversation):

And what about the expression on my face when I sit down at the table to negotiate? That gleam in my eye is pure competitiveness, our daily bread. My rapid way of speaking, my thoughts constantly pursuing new strategies, and at the end of the meeting the mobile phone that starts ringing again bringing more appointments I can't be late for. Distances have been wiped out, dear Father Time, and You can't do anything about it. Technology allows us to do everything in an instant, we're always ready to receive information from anywhere in the world. (p. 26)


Luckily, good old Father Time doesn't take too kindly to such talk. He's the one who takes a deep breath and blows on the house of cards. He does a clever thing to this cocky little bastard. He speeds up, but he speeds up only for Svevo. For everyone else, he moves at his normal pace. Svevo, however, shuts his eyes to fall asleep, and the next thing he knows, he's missed a 9:00 a.m. meeting without ever having fallen asleep.

Time begins to play this trick on Svevo while he is on an airplane, flying from Rome to France to play with one of his girlfriends. Once he realizes that time is speeding up for him and not for others, some of his descriptions are hilarious:

I'd like to scream to everyone to stop. Slow down. Why are you rushing like that? When did the porter take our luggage? And now where's he going so quickly? The concierge didn't even welcome us, he's like a broker spewing out numbers in the middle of the afternoon. The lift zooms up to the top floor, the doors open wide, am I the only one who feels as if they're throwing us out into the corridor? (p. 40)

Funny, yes, but it's also extremely spooky and disconcerting. Part of Sparaco's genius is that you're never (and neither is Svevo) quite sure if time has speeded up for him, or if he's just slowed way down. In other words, is everyone else moving really, really quickly, and he's become a tortoise, or are they all moving at their normal pace while he's on some sort of perpetual time machine that keeps zooming him a few hours into the future? It doesn't matter which it is.

What matters is how effective it is and how I came out of it convinced that Svevo had written a very clever book about how we worship time and how empty our lives are when we do -- as empty as that other object of worship so many authors have tackled: money. Svevo speaks to Father Time and even respects him to the extent that he capitalizes the pronoun "You" when doing so, the same way so many capitalize "He" or "You" when referring to God. He's convinced he has complete control over time. Sort of reminds you of the multimillionaire trader shortly before the 1929 crash, who thought he had complete control over his money, huh?

What's different about worshiping time rather than money is that we can't bank time. People can die with plenty of money left to spend, but we all reach a certain age at some point, the age at which we begin to realize that time will eventually run out on us. It will run out even on those who think they have perfect control over it, those who think they've not only controlled it but have also beaten it, somehow, with all our 21st-century technology. Svevo has reached the age at which he's begun to realize this, but he doesn't want to admit it until time forces him to do so.

What I see is a grim view of a city driven mad by the frenzied pace of its inhabitants. A poisonous curtain of smog lies over the streets, the parks, the buildings. I feel I can almost hear them, all those impatient car horns, like flocks of birds in a poisoned jungle, I can see the pale, exasperated faces of the drivers trapped behind their wheels. They're all running, thinking they can't afford to waste a single second of their lives, when in fact, they're already wasting most of them. (p. 83)


I just love that last sentence. Sparaco has created a monster who is able to see all this -- with Father Time's help -- and he, unlike Shelley's monster, is able to change. He changes in a Scrooge-like way, a very satisfying way to those of us who like Dickens. Not only does he change, but it takes a woman, and real love, to help him do so. I love the fact that he discovers what so many who are stuck in the midst of the workforce rat race have such a hard time understanding, which is that, "You just have to remove yourself from the flow to realize you're not indispensable, quite the contrary." (p. 151)

Of course, when he says that, he still doesn't quite get it. He still thinks he needs to pull himself out of the abyss into which he's been thrown, prove that he is indispensable. Still, think of it: how would any corporation survive if it didn't depend on its employees' assumptions that each and every one of them is indispensable, or, at the very least, that it's possible to make one so? The first word of advice given to anyone who's worried about layoffs is "Make yourself indispensable." Nobody stops to think that doing so is all but impossible.

That's only one small bite from the huge plate of food for thought Sparaco provides. This short book could probably keep Thought stuffed enough for an entire winter's hibernation, maybe even longer. Do me a favor, please. Buy this book. Read it. Tell me what you think.
Posted by Emily Barton at 3:32 PM

Wow! This does sound interesting. I'll have to see whether it's been published in the UK. Thank you for the heads up, Emily!

This sounds so interesting! I'm putting it on my wishlist... I love a short book that packs a punch.