The House Without a Key by Earl Derr Biggers 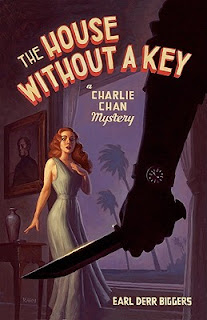 (This book was originally published in 1925.)

If your thing is thrillers that jump right into a murder before you’ve even figured out who the main characters of a book happen to be then The House without a Key isn’t for you. You won’t find any dead bodies until you’re about 1/4 of the way into the book. I do happen to like those types of thrillers – in the right place and at the right time – but I absolutely loved this, the first of Earl Derr Biggers’s Charlie Chan mysteries.

To be honest, when this book was chosen for the Connecticut mystery book club, I had no idea what to expect. I’ve never seen a Charlie Chan movie. I hate to say it, but my only real knowledge of this particular detective comes from the nods given by Saturday morning cartoon animators in the 1970s. I can’t even tell you which cartoons (Hong Kong Phooey, certainly, but he wasn’t very Charlie Channish. Bugs Bunny? Scooby Doo? The Flintstones?) sometimes featured Chinese detectives based on the character. Repeated exposure to cartoon images of the detective did help the young me figure out that Charlie Chan was a movie character, but, you know, those were old movies, like, from my father’s time, when it only cost 10 cents to go see something in black and white.

If this first book is any indication, I’m surprised that Earl Derr Biggers isn’t the household name among readers that an Agatha Christie or a Raymond Chandler is. Maybe that’s what happens when Hollywood truly gets hold of a character but not the author who created the character. I mean no one talks about Hercule Poirot movies or Philip Marlowe movies. The authors of the characters are the names people know. I’m quite sure that if I asked your average reader, “Have you ever read any Earl Derr Biggers?” the answer would be, “Who?” He really deserves more than that.

I loved the slow start to this book that lured me in and made me forget I was reading a “murder mystery”, so much so that I was a bit shocked when I finally encountered The Body. We’re given details that bring both the setting (Hawai’i) and the characters to life. Biggers definitely knew about patrician families and the “black sheep” of such families. He paints a dream-worthy portrait of Hawai’i, a place whose trade winds can mesmerize even the most Patrician members of a New England patrician family, causing them to lose all sense of themselves (maybe even to forget proper grammar). I could just taste the pineapple and smell the leis made with fresh flowers.

Books like these are the ones that make me hate the notion of “genre fiction” and everything it implies to most critics. Then again, I have to admit that I’m a bit elitist in my own way when it comes to genre fiction. Tell me you love to read 21st-century romances, or mysteries, or (popular where I live, the relative newcomer) inspirational fiction, and I’m highly likely to judge you as a rather superficial reader. But tell me that you love the romances or mysteries or inspirational fiction (most of Louisa May Alcott, for instance) that have proven the test of time, and I’ll judge you as a “real reader”.

There are pages in this book that you could’ve handed to me before I read it, asked me who I thought the author was, and I might have responded, “Henry James?” Or someone of his era and disposition. So, yes, there is a murder, and we eventually get caught up in all the things I love about a good murder mystery: whodunit? why? which clues mean something?, etc., etc., but there’s also an undeniable focus on class distinctions, racial distinctions, family dynamics, and gender issues, all set against the backdrop of these exotic islands. So exotic are they, in fact, those from the mainland keep forgetting it’s a part of America. No, you don’t have to worry about converting foreign currency. No, you don’t have to learn another language. My one visit there led me to sympathize with these notions of being in a foreign land, because it really is like being in another country.

It takes a while, but finally, enter stage right: Charlie Chan. I didn’t remember from cartoon portrayals that he’s such an obese man, but obese he is. I guess this helps him loom larger than life, initially. Once you get to know him, though, he certainly doesn’t need girth to loom larger than life.

Again, I don’t know what I was expecting, a Chinese Sherlock Holmes? More likely than not, yes. But Chan is not a Chinese Sherlock Holmes. First of all, rather than being the center of attention, he’s almost a minor character. And he is far, far more patient than Holmes, not only with his “stupid” associates, but also with life in general. He’s a man who just calmly goes about solving mysteries, never racing to any locations, but being exactly where he needs to be when he needs to be there in order to receive the information that just comes his way, almost obedient to his expectation that it will. Meanwhile, he enjoys his life while waiting to receive such information.

I have to admit that I had my eyes wide open for early 20th-century racism to rear its ugly head. I’m sure (maybe that’s unfair, coming again from someone who’s judging without having been exposed to something) that the movie versions of Chan were full of it. Here, I was hard-pressed to find it. Yes, Charlie Chan speaks a very interesting version of English, but he speaks it eloquently and intelligently. He’s not portrayed as some strange “Chinaman” who “put pee-pee in your Coke” and who goes around with chopsticks ready to attack cats for dinner. He tends more toward that sage “Confucious say…” Chinese stereotype, but even there, he seems to draw a line and to come down to nothing more than a brilliant observer of East and West, an ability that serves him well in his profession. All I can say is, “Kudos to Bigger for being so far ahead of his time and place.” (Then again, I’m a white, Southern, Anglo-Saxon female. Those from different backgrounds – Chinese Americans, say – might heartily -- and have every right to -- disagree with me.)

One other thing I loved about the book was the humor. Bigger knew how to play off the weaknesses of the aristocracy, and he did so with such grace. It’s funny how often I’ve been surprised to find myself laughing out loud over the books we’ve read for this group. I love funny books. Why do I assume most murder mysteries won’t be funny? Is it because I cut my teeth on Agatha Christie? She’s not real funny, but you know, the likes of Raymond Chandler and Ross Macdonald (or to make it more recent) Donald Westlake and Janet Evanovich sure knew/know how to make a reader laugh.

Finally, we get to the whodunit? itself (we always do, don’t we?). I love an author who can surprise me, and Earl Derr Biggers did. It isn’t that I didn’t quickly peg who I thought was the murderer, it’s just that I fell for the killer’s alibi until the end of the book when I was finally told how it didn’t hold up. I love a good mystery, especially one that does such a good job of surprising me and that includes a little romance on the side (I suppose, today, this book would be slotted into the "romantic mystery" genre, but, like any good book, it's so much more than that). Need I say I’d like to make Earl Derr Biggers a household name?

I was surprised to find that I'd guessed the murderer correctly, which hardly ever happens. I agree with you that this is a very good book, lots of fun and surprisingly complex in its portrayal of Hawaiian culture and surprisingly free of stereotypes. I liked the author's tone of gentle mockery toward John Quincy and the Boston culture.

I love this sort of book and am a huge fan of the slow build up to a murder. When every book is obliged to begin with a gripping, dramatic scene, I actually lose interest. And the novels from this era were so delightfully witty, weren't they? I'm a sucker for anything that makes me laugh. I'll add this name to my list, which is currently topped by Ethel Lina White. I have her 'The Lady Vanishes' to listen to as an audio book...