Claire DeWitt and the City of the Dead by Sara Gran 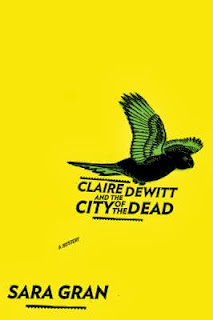 This was October's Connecticut mystery book club read. What an appropriate title for October (although I actually read it back in September).

I've never been to New Orleans, but I've always wanted to go. It's one of those American cities that mesmerizes me because it seems much older than it can possibly be, a city that must be at least 500 years old and teeming with all kinds of good and bad spirits, the two sides constantly struggling for control. Sara Gran's first Claire DeWitt mystery didn't disabuse me of this notion.

Gran's New Orleans is seedy, romantic, gothic, mysterious, evil, spooky, passionate... She's done a wonderful job of painting the city in a way that brings countless numbers of adjectives to mind, many of which are polar opposites. Having never been there, I'd say she's also done a wonderful job of capturing the city in all its complexity. And something about her brought Caitlin Kiernan to mind, even though the two authors are not of the same genre.

You'll get no unbiased review here. I loved the book from the minute I started reading it. Claire DeWitt is an interesting sleuth who, with the exception, maybe, of "the cozy", draws on all types of fictional detectives, rolling them into one to produce someone truly unique. Much to my surprise, I also found her truly believable, which she probably wouldn't have been in the hands of a less talented writer. She's part hard-boiled Phillip Marlowe (although with the 21st-century twist of turning more to drugs than to booze to numb all the horrors her chosen career forces her to face), part whacky Stephanie Plum and her ironic sense of humor, part Charlie Parker and his insight into the supernatural, and there's a little Hercule Poirot, since her mentor from the grave is a French mastermind. She's even a bit like Mary Russell, although she never apprenticed with the Great Detective himself the way Mary did with Sherlock Holmes. Claire, instead, apprenticed with another apprentice, who is also now dead and lives only in Claire's memory, dreams, and hallucinations.

Claire, who grew up in New York (Brooklyn, to be exact) is a former resident of New Orleans but is living in California when she's called back to the city that is swarming with her ghosts, to help find out what happened to a lawyer who disappeared in the aftermath of Katrina. With the help of some of those ghosts of hers, her own wit and ingenuity, not to mention consultations with the I Ching and the occasional hallucinogen, she manages to figure out that this "nice guy", just like this "nice city", might have had a seedier side. Along the way, she meets some interesting new people and reconnects with some old. I, for one, was quite surprised to discover whodunit and why.

Happily, there's a new Claire DeWitt novel. I'm quite content to add this series to my growing pile of mystery series I read.

Another mystery writer I will have to check out! I've never read anything set in New Orleans, but I'd like to. I thought of you today, as I was finishing my first Elizabeth Daly novel (but not my last). Classic golden age crime set in 1940s New York, very slick, very clever. I loved it. Oh I should mention the title: Arrow Pointing Nowhere. Just in case you're interested.

That does sound like perfect October reading (September counts since it was for October book club). Love the cover too.

Litlove, I'd say this is a great place to start when it comes to reading a book set in New Orleans.

Stefanie, quite perfect, and, yes, the cover's great, isn't it?

I really liked this book too, as did many members of the book group. Those who didn't like it so much found the various pieces didn't fit together and weren't convinced by the mystical Sillette (sp?) stuff. But I liked the tone very much and found Claire believable and charming, even though she's a pretty difficult person to like.

oh, this sounds so intriguing! I must find a copy...thanks so much, Emily. It's not one I've seen around or mentioned much on blogs. I wonder what it is about Louisiana that sets up so perfectly for mysteries and gothics? whatever it is, this one sounds like it might fit in nicely with all the other series set here.

this sounds perfectly up my alley - I'm going to be procuring this in some way, shape or form shortly! you know what? I actually find it sort of hard to believe you haven't been to New Orleans!

Courtney, I think you'll really like this one, and yes, it's weird that I've never been to New Orleans. I really must get there one day.