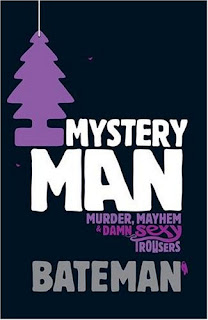 How could I park the No Alibis van near the shop when the place was swarming with police and reporters and the van had Murder is our Business on its side? Would it not be a surefire indicator that I was involved in the murder of Malcolm Carlyle? How many miliseconds would it be before the long arm of the law grabbed me by the throat? And it wouldn't even require a long arm. A short arm. A stunted arm. A police officer suffering from growth hormone deficiency in the general arm area would throttle me the very instant he saw the No Alibis van with its oh so witty catch line. (p. 179)

I wish I'd written that.

Throwing caution and brain tumors to the wind, I removed my cell phone and called Jeff. (p. 179)

That, too. But I didn't. Those thoughts are coming from Bateman's (Colin Bateman, but here he refers to himself, in Madonna-like fashion, as "Bateman") protagonist (the mystery man who has no name) who owns a mystery bookshop in Belfast (the "No Alibis" mentioned above) and who seems to have taken over a good deal of the caseload from the private detective who used to have his shop set up next door to No Alibis before he went missing. And I was treated to thoughts like that first quote from beginning to end while reading this book, the latest for the CT mystery book club. I probably don't need to tell you, then, that I found the book laugh-out-loud funny.

It got off to a bit of a slow start for me, though. I picked up on the humor immediately, but then I began to wonder if it wasn't a little forced. Was Bateman trying too hard?

Soon enough, however, I got wrapped up in the story. To make it easier to write about it here, I'm going to have to resort to naming No Alibis's proprietor. He adopts various authors' names when taking on cases, and at one point, he calls himself Walter Mosely. Walter fits him, so let's call him Walter.

Walter starts small, solving mysteries like The Case of the Missing FA Cup and The Case of the Fruit on the Flyover (in a nod to Conan Doyle, Walter names his cases and refers to some -- e.g. The Case of the Fruit on the Flyover -- that I'm presuming will never be related to Bateman's readers. This book, among other things, is a great big nod to many, many writers, as well as an opportunity to attack contemporary well-knowns). It can't remain simple, though (this is a mystery after all, not Encyclopedia Brown). A man who is dabbling in another detective's business is bound to stumble upon a murder at some point. You know from the get-go that it's going to be said detective (truly. He doesn't come right out and say it, but, unless you've never read a mystery in your life, you know it is, so I'm not giving anything away here). This becomes The Case of the Dancing Jew, a case into which he ends up dragging Alison, the woman who works at the jewelers across the way. He's had a huge crush on Alison for some time; some -- although he will tell you he hasn't been -- might even say he's been stalking her.

...was already a much-garlanded author of literary fiction when he decided to write crime under a pseudonym before being "accidentally" unmasked. He gives the impression that it is just something he dashes off while waiting for divine inspiration to strike his real work. In reality, he offers nothing new to the genre, and instead merely rehashes some of its worst clichés. (pp. 67-68)

Hmm...doesn't that sound an awful lot like Benjamin Black (a.k.a. John Banville)? And are you beginning to catch on to how opinionated Walter is? I happened to love all his opinions about the writers he stocks (or doesn't, as the case may be) in his bookstore, mainly because I agreed with him most of the time. However, I loved his opinions even when I didn't necessarily agree, for example, when he said, "Life is too short to spend an hour and a half on a mystery that will ultimately be solved by a cat." (pp. 23-24) I haven't actually read any of those mysteries-solved-by-cats-and-dogs, but I think, given the right time and place, I'd probably be perfectly happy wasting an hour and a half on one.

Anyway, back to Alison. She comes into the store, puts Brendan Coyle in his place, and Walter falls even more in love with her. So much so that he drags her into this most dangerous caper of his, the first to involve an actual murder. In fairness, Walter doesn't exactly draw Alison into it, more like he refers to it, and, next thing you know, she's forcing him to discover a dead body with her. He spends a good deal of his time trying to back out of solving the case, but she keeps pushing him.

What I haven't told you about Walter is that he's a character who could give Monk a run for his money. Check off every neurosis you can think of, and he's got it: O.C.D., phobias, paranoia, hypochondria, etc., etc. He doesn't really want to be involved, is very afraid to be involved, and yet he can't quite help himself, because (after years and years of being deeply immersed in the crime genre, as well as being very intelligent), he has an extraordinary talent for putting the pieces together to figure out whodunit. Meanwhile, Alison is the fearless one, the one with the guts to counter-balance his brains, the one willing to do things like accept a dinner date with a suspect, even though if he's a killer, he's likely to try to kill her.

These two make a great team as well as a wonderful romantic couple. Together, they do solve The Case of the Dancing Jew (it seems I've been reading an awful lot of books lately -- for instance, mysteries for the CT book club -- that have plots that figure around Nazi Germany, which this one does. I guess it's a subject that never gets old. Let's hope not, lest people forget or begin to believe the idiots who'd like us to think it never happened). The mystery is a good one, although, yet again, I found myself liking it more for the characters than for the plot.

I hope this isn't a one-off. I'd love to read more mysteries with this crime-solving duo. That is, if Walter doesn't turn out to be Norman Bates (which he very well could, but that's a spoiler I'm not willing to give you. You'll have to read the book to figure out what I mean by that. If you do, expect your TBR list to grow exponentially, as TBR lists have a tendency to do whenever one reads a book whose main character owns a bookshop).

This sounds absolutely delightful. I'm always on the lookout for a good new crime novelist. I'm really enjoying Ross Macdonald lately, and that was a wonderful tip to come from you, Emily!

Hilarious! I don't agree with B. Black and would have liked to find the line on the cat-solved mysteries myself (after having read one or two ;) !), sounds like I must check out this guy's books!

Litlove, so glad to hear you're enjoying Macdonald (had a feeling you would). Bateman (at least this one) is great fun when you can get around to him.

Smithereens, he's very funny. I think you've got the right sense of humor. Good luck finding him (he was hard to get here in America. I had to order him from a second-hand shop in GB).

This is the first of at least three Mystery Man novels. The Day of the Jack Russell and Dr. Yes are the next two. They aren't published by an American press, as far as I have found, so you either have to go to Amazon UK or go to the mystery bookshop in Brattleboro, VT, where the proprietor imports a lot of UK-only mysteries.

I agree with you about enjoying all the references to other writers and to crime writing conventions. There was so much to enjoy here. But I couldn't get over my feeling that the guy's relationship with Alison was an utterly unrealistic male fantasy. I suppose I shouldn't expect this book in particular to be realistic, but still, I couldn't believe how patient, understanding, smart, wonderful, etc, etc, she was and that she seemed never to give up on him, even when she should have. It will be an interesting discussion this Saturday!

Alfred Hitchcock is in the book? Never mind.

Hobs, I'll have to get my hands on those other two. Sounds like a good excuse to go to Brattleboro, VT, where I've never been.

Dorr, funny, I'm usually on top of that sort of thing, but I completely missed it this time. I think I was laughing too much. Would love to know how the discussion went.

Carrie, Hitchcock easily could have been in the book.