Once Upon a Time Challenge 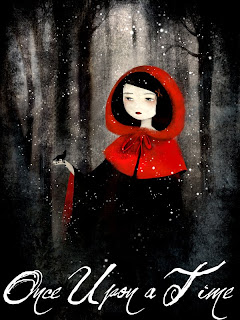 Spring is in the air. Yes, it's been freezing cold here for the past four days, but spring is in the air nonetheless, because the birds are chirping, the days have gotten longer, and the lilac bushes have buds on them. That means it's a good time to embark on a quest or two.

I've never participated in Carl's Once Upon a Time challenge, but I am doing so this year for Challenge V, basically because I can't believe I've been reading about it all these years and have never decided to do it. The challenge began on the first day of spring and runs through June 20th. Carl kindly gives us many different levels from which to choose.

Seeing how I am typically so successful when it comes to challenges, I probably ought to take on The Journey (read at least one book between now and June 20, and that's it. Reading more is fine, but the only commitment is one), but seeing how I also tend to be someone who bites off more than she can chew, that level isn't doing it for me. I've decided to take on Quest the Third, which is to read at least five books that can be classified in any of the following categories: fantasy, folklore, fairy tale, and mythology. This one also includes reading A Midsummer Night's Dream in June (well, how could I not want to do that?).

The Amber Spyglass by Philip Pullman. I've been saving the last in the trilogy, but I'm ready to read it now.

American Gods by Neil Gaiman. It's another one I've been saving, because it's supposedly his best. Anyone, is it? Of course, I could also just read some more Sandman collections, but they're probably more appropriate for Carl's R.I.P. Challenge.

The Annotated Alice: Alice's Adventures in Wonderland and Through the Looking Glass by Lewis Carroll. I last read this when I was a teenager, and I've been wanting to reread it for quite some time now.

The Blessing of Pan by Lord Dunsany. I want to read more Dunsany, and Pan is one of my all time favorite mythical characters.

Bullfinch's Mythology. Speaking of mythology, I'm constantly getting my myths confused and mixed up. Reading this might help set me straight (or, might get me even more confused, but how will I know until I read it?).

The Bull from the Sea by Mary Renault. It seems I probably ought to read Bullfinch's first, but I might skip that and read this instead.

The Complete Grimms Fairy Tales. I don't think I've ever read all of them. Keep reading this list to find out why I'm suddenly interested in doing so. As a matter of fact, I'm pretty sure I would have been reading this whether I'd joined the challenge or not.

The Earthsea Trilogy (A Wizard of Earthsea, The Tombs of Atuan, and The Farthest Shore) by Ursula K. LeGuin. I read the first in this trilogy years ago and loved it, but I've never gotten around to reading the whole thing. At this point, I need to start over with that first one.

Godmother: The Secret Cinderella Story by Carolyn Turgeon. Someone else read this once for Carl's challenge, and it sounded so good I went out and bought it.

The Grimm Legacy by Polly Shulman. This book is basically the reason I decided to join the challenge. I'm halfway through it, which means I've already got one book almost done. (And, yes, this is why Grimms is on this list.)

Jonathan Strange and Mr. Norrell by Susanna Clarke. I got this one at last spring's library book sale. I think it might be nice to read it in time for this year's sale. Also, I want a good fantasy written by a woman, as it seems so much lauded fantasy is written by men. This one has been highly lauded, and I'm looking forward to it.

L'Morte d'Arthur. Yes, it would be a reread, but I just can't get enough of it. And I think it's going on ten years since I last read it. It's something that ought to be read at least every ten years or so.

Mort by Terry Pratchett. Speaking of death...Also, I read my first Pratchett in the spring, and I think of him when the daffodils begin to bloom.

The Neverending Story by Michael Ende. I am completely superficial, as I want to read this one only because the copy of it that we own is so beautiful. I do know it's gotten rave reviews, though, and years ago, I was the nanny for a kid who couldn't get enough of the movie.

The Solitaire Mystery by Jostein Gaarder. What's not to love about Gaarder? It's been a while since I read Sophie's World. Time for this one.

Tom's Midnight Garden by Phillipa Pearce. This was a Slightly Foxed discovery.

And, of course, A Midsummer Night's Dream. I haven't read it since college, although I've seen it performed at least twice since then.

They all look great, and some have been in the TBR tome for ages and ages. Tell me which ones you've read and what you'd like to see me read and review. Then, be prepared for my choosing the five shortest ones on the list (and the Shakespeare to make six total).

Good luck with your challenge! I am on book two of twelve of "bought these years ago, and still haven't read them" and I keep wondering why it is much harder than it seems??

Aha, this might be a chance to read some of the fantasy books I bought pre-Christmas and never got around to. I'd like to read The Neverending Story, and also at some point, the Jonathan Strange novel - so I'd be very interested in what you thought of those ones. But I do so agree that having a list that you choose from is much better than picking out five in advance. As soon as obligation is involved, I tend to lose motivation!

Pratchett is always great. Earthsea Trilogy is good and so is Dandelion Wine. And of course the Alice books are marvelous and American Gods is really good too. Can't wait to see what you decide to read!

That sounds like a fun challenge! The only book I've read from this list is A Midsummer Night's Dream, but that is always a good read.

What a stunning list! And isn't Slightly Foxed a wonderful place to discover books you absolutely have to read :-)

Have you read The Children of Green Knowe by Lucy M. Boston? I think you would like it.