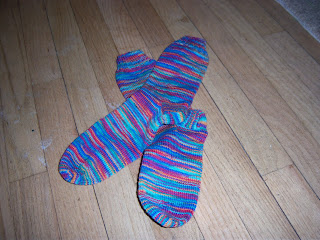 For a number of years, I wished for a pair of hand-knitted socks. Ideally, I'd knit them myself, but we all know how well my little knitting project went. I finally had to admit that I just don't have the patience for it. Maybe it's something that could teach me patience, but not at this point in my life. I'd rather spend my time reading and writing.
Since I'm probably never going to knit my own socks, the next best thing, of course, would be to have a friend who is so-inclined knit a pair for me. In fact, that's better than knitting them myself, because every time I put them on, I would think of my dear friend who'd spent all that time and effort knitting me a pair of socks. How humbling.
Well, for my birthday last year my friend Linda did just that. She gave me a pair of socks that she had knitted for me. I probably shouldn't say it was the best birthday present anyone ever got me (after all, I got an engagement ring one year for my birthday), but it was definitely one of the best. And I was right: I think of Linda every time I wear the socks, which I happen to be doing today, because it's suddenly turned quite chilly here in Pennsylvania.
For a number of years, I've also wished that I appreciated poetry more than I do. It's high time I got over my fear of poetry, left over from my high school days. I've had this wrong belief for so long that all poetry is chock full of hidden meaning that I'm too stupid to understand. Now, confronting this irrational fear is something, unlike knitting, that I know I can actually do. In 2011, I've chosen to read more poetry than I ever have, and I've begun to make great strides when it comes to poetry appreciation, begun to realize that, yes, some poetry is chock full of hidden meaning that I'm too stupid to understand, but plenty of poetry speaks worlds to me, or touches me, or makes me think. I've also realized that there are plenty of novels out there with hidden meaning that I'm too stupid to understand, but I don't avoid reading novels, and you'd never hear me say, "Oh, I'm not a big fan of novels."
I mentioned in my recent post on what I read while I was in Maine that one of the books I read was Americans' Favorite Poems edited by Robert Pinksy and Maggie Dietz. In this collection, Emily Wilson Orzechowski, a 59-year-old teacher from Oneonta, NY, chose the following poem by Chilean poet Pablo Neruda:
Ode to My Socks
(translated from the Spanish by Stephen Mitchell)
Maru Mori brought me
a pair
of socks
which she knitted herself
with her sheep-herder's hands,
two socks as soft
as rabits.
I slipped my feet
into them
as though into
two
cases
knitted
with threads of
twilight
and goatskin.
Violent socks,
my feet were
two fish made
of wool,
two long sharks
seablue, shot
through
by one golden thread,
two immense blackbirds,
two cannons,
my feet
were honored
in this way
by
these
heavenly
socks.
They were
so handsome.
For the first time
my feet seemed to me
unacceptable
like two decrepit
firemen, firemen
unworthy
of that woven
fire,
of those glowing
socks.
Nevertheless
I resisted
the sharp temptation
to save them somewhere
as schoolboys
keep
fireflies,
as learned men
collect
sacred texts,
I resisted
the mad impulse
to put them
in a golden
cage
and each day give them
birdseed
and pieces of pink melon.
Like explorers
in the jungle who hand
over the very rare
green deer
to the spit
and eat it
with remorse,
I stretched out
my feet
and pulled on
the magnificent
socks
and then my shoes.
The moral
of my ode is this:
beauty is twice
beauty
and what is good is doubly
good
when it is a matter of two socks
made of wool
in winter.
(Pinsky, Robert and Maggie Dietz, eds, Americans' Favorite Poems: The Favorite Poem Project Anthology, New York: W. W. Norton & Co., 2000. pp. 200-202)
Emily Wilson Orzechowski chose it as her favorite with this comment, "I have knitted socks." (p. 200) Emily Barton would say, "I have received socks knitted by a dear friend. Everyone should be lucky enough to have such a friend in life." I'm pretty sure Pablo Neruda would agree with me.
Posted by Emily Barton at 9:54 AM

I love poetry. I assume some of it's going over my head but whatever. The joy of the language, the phrasing, the rhythms...

You should appreciate this! Ode to My Sock or this one if you can't see that one. (Scroll down to Dec 20th for the best pictures.)

What a fabulous poem!

I love Neruda. And I love knitted wool socks.

I'm so glad you like the socks Emily! And I love the poem.

Isn't Neruda great? I love this one of his. And those are a very nice pair of socks you were given. Now that I am done with school and the weather has turned cool I keep thinking it's time to pick up my knitting again. I love making socks and promised a friend a number of years ago I'd make some for her. She even send me an outline of her foot so I could get the sizing just right. She is still waiting for the socks but then she promised me a quilt and I am still waiting for that too so I guess we are even. :)