R.I.P. Challenge: The Castle of Otranto by Horace Walpole 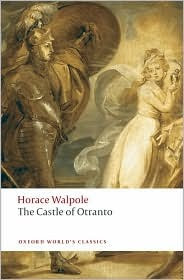 Walpole, Horace. The Castle of Otranto. Oxford: Oxford University Press, 2008.
(This book was originally published in 1764.)
I'm still catching up on my R.I.P. challenge reads (and will be for quite some time, so bear with me). It's great to go away for three weeks, but not so great to do it in the midst of the R.I.P. challenge, when you finally decide to join it. Anyway, this was one of the books I chose for the challenge.
When Walpole first wrote The Castle of Otranto (as many fiction writers are wont to do today, although I'm guessing it may have been rare in his day), he claimed it was an old manuscript recently discovered and translated by "William Marshall Gent." I had to laugh when I read in the Introduction to this edition that,

His friend, the Revd. William Mason later wrote to assure Walpole that he himself had been entirely duped: 'When a friend of mine to whom I had recommended The Castle of Otranto turned to me with doubts of its originality, I laughed him to scorn and wondered he could be so assured as to think that anybody nowadays had imagination enough to invent such a story.' (xi.)

I am quite sure I would be as "duped" as the poor Revd. were someone to present me, tomorrow, with a so-called "lost" manuscript that manages to weave into it every gothic detail known to readers of such fare. That's because I'm convinced no one in the 21st century has the kind of imagination our ancestors had. Ironically, I would believe it whether the manuscript was "lost" from the 12th or the 18th century. You see, despite the fact that Walpole wrote the book, in part, to protest the 18th-century's "realist fiction," as he called it, he'd seen nothing, as far as I'm concerned, compared to the 21st-century's cynical, realistic fiction.
Forget what he might have thought about today's realistic fiction. I wonder what he might have thought about much of what's written today under the guise of "supernatural" and "fantastic" by authors who, outside the contexts of their bestsellers, would gleefully join in debates to prove that, personally, they believe in nothing other than the rational and the scientific. We've done our best to rid the world of all mystery and romance, other than Hollywood's simplistic and sentimental versions, and to make humans the center of the universe (very Darwinian of us, really).
I read The Castle of Otranto a number of years ago, or so I thought, but I now wonder if I just started it and never finished it. It doesn't show up in past book journals I've kept, and all I could remember about it, before I read it this time, was some sort of wicked prince, a sickly son, and a huge helmet. I couldn't possibly have finished it, because there's so much more to it than that, and the "more to it" is very memorable.
Anyway, I agree with the one thing I've heard everyone I know who's read it say about it: it's hilarious, because it's so over-the-top. May I repeat myself (or am I repeating the Revd.?)? It's incredibly imaginative, especially given the fact that it was the first novel of its kind. Walpole had no contemporaries to read who made him think, "Ahh, I could do that. Let me try," which is not to say that Walpole didn't provide plenty of nods to other writers, most especially Shakespeare.
Speaking of drama, if I were to sum up the book in one word, "melodramatic" would be my word of choice. So much so that I often felt that I was reading a play rather than a novel, despite the fact that all the dialogue is woven into the text in paragraph form without the use of quotation marks. That is, the human characters are all melodramatic and engage in the sort of dialogue (e.g. "'Villain! monster! sorcerer! 'tis thou hast slain my son!'" -- p. 21) that makes the book so funny.
We mustn't ignore the Castle, though, a character in its own right. The castle's large and lovely and complicated, with his turrets and towers and secret passages, not to mention just plain secrets. Oh, and did I say ghosts? I mean, would he be able to hold his head up without some ghosts? Add some ghosts to this most magnificent hero. He's a most magnificent hero, and I just may have fallen madly in love with him, but then, I've always been a sucker for a lovely castle. Like most romances, we can forgive it for not exactly being the best written book we've ever read. I mean, it's provided us with a heroic castle and a fun plot that has as many twists and turns as a secret passage.
Pour yourself a steaming cup of tea. Pull some short bread out of the cupboard, and place it on the tea cup's saucer. Turn off the phone. Tell everyone in your household that you have some horrible communicable disease, and they must stay away from you. Then, light the fire, sit down by it with your tea, short bread, and this little book, and don't get up until you've turned the last page. I promise you won't be disappointed.
Dear Smithereens requested a few photos from me. I thought I might use them to demonstrate details from the book. Here they are: 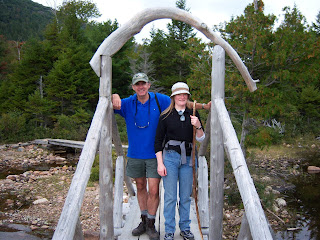 These characters did not appear in The Castle of Otranto, but that bridge did, I'm sure. Some knight and princess are stuck in the woods behind it. 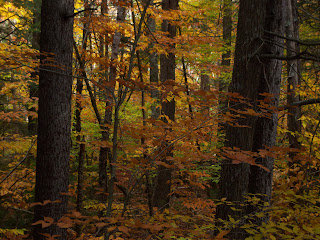 The forests around the castle probably didn't look like this. Too golden and New England-y, and well, New England hadn't yet been invented. 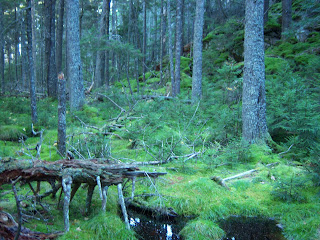 More like this, I would think. There must be a witch hiding in there somewhere, huh? 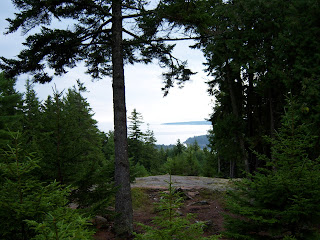 The sea as viewed from the castle window. If you're lucky, some ghostly vessel will soon arrive on the horizon. In this case, it might be a giant ghostly vessel. 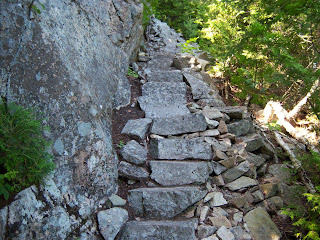 A most treacherous path for a princess to follow, should she choose to run away from a castle.

I think you are absolutely right, that imagination is limited by the culture and the age we live in. That's why pioneers are so incredible; they've somehow managed to see beyond the horizons of their cultural world. I haven't read this novel, although I do own a copy of it (it looks very short!). I can see that it's one of those books that's perfect for a certain mood, or certain (wintry) conditions. I will bear it in mind for just such a moment!

Litlove, yes, it's perfect for the right mood and the right weather conditions. I'd love to hear your take on it if you ever find yourself in that sort of mood.

I haven't survived the Mysteries of Udolpho by Ann Radcliff, so I guess Otranto is not on the menu for me soon (unless I want to have a laugh?)
Thanks for the pictures, they were suitably spooky and gothic. Werent' they discovered by chance in the old camera of a William Marshall Gent?

Smithereens, I haven't tried Radcliff yet, but Walpole is quite an easy read -- very plot-driven. And, yes, I do believe the pictures were found in some old camera belonging to a Mr. Gent (or was it Ms. Gent? No one's quite sure).

I have had Walpole and Radcliffe sitting on my bookshelves for the longest time, along with a number of other Gothic works.
I think your review has finally convinced me to move this particular one up my list. I must go off and ferret it out now.

And so you know how I come to be visiting, I found your blog via Litlove's.

O.W.W. -- Glad you found me. I don't think you'll be disappointed if you do move Walpole up on the list (he sat on my list for ages before I finally got around to reading him).