R.I.P. Challenge Catch Up: The Penguin Book of Ghost Stories 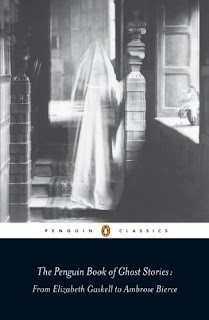 Newton, Michael, ed. The Penguin Book of Ghost Stories: From Elizabeth Gaskell to Ambrose Pierce. London: Penguin Books, 2010.
(Yes, I know it's December, but I'm still catching up on writing about my R.I.P. challenge books. I've got two more to tell you about after this one. Oh well, the winter is as good a time as any to pick up a spine-tingling book, so maybe I'll inspire some good winter reading for you -- or titles to put on your list for next year's R.I.P. challenge).
Ahh, what could be better than to sit down on a rainy afternoon in Maine, large mug of tea at hand, and a collection of ghost stories? I read the majority of these stories while in Maine in October. They were a perfect complement to a volume of Victorian vampire stories I'd also brought with me to read.
I liked this collection because it included some of my all-time favorite ghost stories (W.W. Jacob's "The Monkey's Paw", M. R. James's "'Oh, Whistle, and I'll Come to You, My Lad'"), but it also introduced me to stories I didn't know, most written by authors I didn't know (Mary Elizabeth Braddon's "The Cold Embrace", Mary Austin's "The Readjustment"). Talk about a book that leads one to read more. I could probably spend 2012 doing nothing but reading books and story collections I've been inspired to read just from this book. Instead, as is typical, despite notes I've made in the book and titles I've put into the T.B.R. tome, this book will probably go on a shelf, and I'll read nothing more that I learned about from its pages until years from now when someone says to me, "Have you ever read this collection of Margaret Oliphant stories? You really must."
What makes this collection great is Michael Newton's Introduction and his Notes. The Notes are terrific. They provide biographical information about each author as well as information on when and where each story was first published. I hate cheap collections that give the reader absolutely nothing to help put stories into context. Occasionally, I came across what I consider classic "Penguinesque" endnotes, the sort that make me think, "I flipped all the way to the back of the book and nearly lost my place for that?" Here's a prime example for you:

He was made welcome at the Globe Inn, was safely installed in the large double-bedded room of which we have heard, and was able before retiring to rest to arrange his materials for work in apple-pie order upon a commodious table which occupied the outer end of the room, and was surrounded on three sides by windows looking seaward. (p. 264)*

Oooh. The Monkey's Paw is so creepy!

I love the Monkey's Paw, too! Very creepy! And the quote is by M.R. James, another of my favorite ghost story writers!

Grrr, silly end notes really, really get up my nose! But the book sounds delightful and I can imagine you loving it in Maine - the perfect setting. As for the quote, hmmmm, tricky. Henry James?

I need to get this book asap!!!! How do I not have it? Some of the stories sound so perfect. Thanks for the review, Emily.

I can't find you latest post (from now , early Jan) so I'll wish you happy 2012 to you and Bob, and that it be a quiet year for you two. That would be lovely, wouldn't it?

Grace, yes it IS creepy.

Jenn, sorry it's taken me so long to tell you you've won. The quote is, indeed, M. R. James. Email me with your mailing address, and I'll send you a copy of the book.

Litlove, well you got the last name right, but it's M. R., not Henry.

Susan, yes, you must get this collection. You couldn't find my latest post, because this was it, but I'm hoping to remedy my lack of blog posts going forward (see my latest). Happy 2012 to you, too! Yes, a quiet year would be quite lovely.