Tolstoy and the Purple Chair by Nina Sankovitch 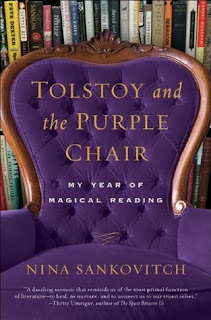 I have been curious about this book since it came out. I will have to give it a read at some point.

Oh Emily! I saw your message on facebook when Peter first fell ill. I am so sorry that your family has been put through this trauma and so relieved to know your brother-in-law will make a full recovery. I cope very badly indeed in these sorts of circumstances and would be absolutely yearning for my books and my home long before the fortnight mark was passed! I'm so glad you found a book that kept you firm, supportive company through these difficult weeks, and here's hoping you can come home very, very soon. Sending hugs.

Kailana, you won't be disappointed.

Litlove, thanks so much for your good wishes and hugs. Peter is doing very, very well and is expected to be able to be by himself by this Friday, so I get to head home on Saturday. Yea! Meanwhile, I highly recommend getting a copy of this book for the next time you're going through a difficult period. It's really great solace for a reader.

So sorry to hear about Peter's illness. How scary! Glad he will be making a full recovery. I know what you mean about missing your books. They are such a comfort, aren't they? I was mixed about the Sankovitch book when I read it, but it seems that it found you at a perfect time. Amazing how books can do that.

Comfort books like that are a blessing. I'm so glad to hear that Peter's on the mend.

I'm so glad your brother-in-law is on the mend. And I have to get Nina's book. I took a bunch of classes with her fantastic mom, Tilde Sankovitch, who taught French literature at Northwestern when I was there. I loved her.

My jaw dropped when I read about Peter not having a spleen. The same thing happened to my friend Sue, the tick infection and then being hospitalized because she does not have her spleen either. But she is completely better, and I am so glad to hear that Peter will be too. Christmas will be extra special this year for all of you.

Books are essential to survival. I do not know what I would have done had I not had them during Hurricane Irene, or the loss of my cat, or any of the other stressful things that have happened lately. I always need a stack nearby, just in case, so I'm glad Peter had something handy for you when your own book-friends were not nearby.

Lilian, yes, a real blessing, and Peter is very much on the mend, much to everyone's relief.

Danny, how cool that you had Nina's mom. You'll like the book, I'm quite sure (would have been a good thing for you and Kendall during your days in the NICU).

Ms. Knits, how weird that we both know someone who got this very rare disease and that neither of them has a spleen. Peter is doing much, much better, but I warned him, because of your FB comment that it might be a long recovery. Books are most definitely essential to survival, one tiny step below food and water, huh?

Emily, somehow I missed this post, and I'm sorry I'm so late in coming here to say something. By now you're home and your brother in law is recovered, which I am very happy to hear about.

I've been hearing about this book too, and your review has convinced me that I do want to read it, very much.

I perfectly understand what you mean by needing to have your books around you, and how comforting they are. I think of them as my security blanket. I really like how you describe how the writer of this book goes back and forth in her history of reading to see how she has drawn comfort throughout her life from reading. Reading does sustain us book-lovers, doesn't it?