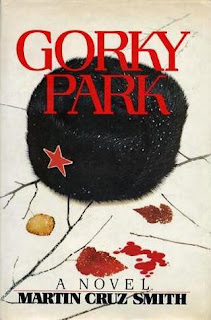 Smith, Martin Cruz. Gorky Park. New York: Random House, 1981.
Three corpses show up in a park, buried in the snow. One of the weathered investigators who finds them is shocked by their condition: faces basically skinned off the heads and fingers cut off at the first joint, so no identifying prints can be had. If this were a 21st-century novel set in America, we'd have the makings of a story about some sick serial killer who will go on to terrorize a city, skinning more faces and cutting off more fingers before our clever detective finally identifies and catches him.
But this isn't 21st-century America. It's 20th-century Soviet Union. A Cold War era novel written by an American. I must confess that I was less than thrilled that this book was the March choice for the Connecticut mystery book club. In 1984, I flew to England for my sister's university graduation. Gorky Park was the movie on that flight. My father and I both chose to watch it, and in my comatose state (I'm exhausted, always, on overseas flights but rarely manage to get much sleep), I tried to follow the complex plot with very little success. I was convinced I was in for the same sort of luck with the novel, sure that knowing as little as I do about Russia (either Soviet or non) would make it impossible for me to penetrate.
I needn't have worried. Gorky Park turned out to be one of those novels that, instead of being confusing and referring to all kinds of things about which I knew nothing, actually taught me quite a lot about those things. Some authors can do this, serve as teachers. Others lose a reader like me, expecting me to have advanced degrees in their book's subject before I even get started. Cruz Smith, I guess, assumed his readers knew nothing and did his best to inform us.
Because we were in Soviet Moscow, the plot was, indeed, far more complicated than a serial killer terrorizing the city. It was interesting for me to have just read 1984 as a prelude to this, because it's another book in which the main character, and thus the reader, has no idea whom to trust. I found myself not trusting anybody (well, except Arkady Renko, our Chief Homicide Detective and main character), and I was right not to do so. Certainly, during the Cold War, the Soviets weren't to be trusted, but don't be so quick to trust the Americans in this novel, either.
That's ultimately what I found most interesting about the book. Cruz Smith was challenging stereotypes and encouraging readers to think about the fact that corruption is a human weakness, not something that any one society necessarily does better than any other. Yes, we were in Moscow (and New York), but we could also have been in Madrid or Tokyo or New Orleans. And our killer? Well, how and why and where he chose to kill was a bit more complicated than the standard serial killer's profile, but underneath it all was a murderer who was just as brutal, just as animalistic, someone with the same sort of overinflated ego and lust for blood.
Although I didn't actively dislike the book, I will say it wasn't one of the best I've read. Given the genre and topic, it moved extremely slowly. I never quite got that feeling of dying to know what was going to happen next, flipping through the pages, afraid for the characters and what might happen to them. In fact, I found 1984 to be much more of a page-turner than
Gorky Park. This book was far too easy to put down and not so easy to keep picking back up. There was a distance between the characters and me that was unsettling, that kept it from quite coming alive.
I think next time I read a mystery that takes place in Moscow, I'll read one written by a Russian. (In fact, I'll take recommendations from anyone who's read any good Russian mysteries set in Moscow.) I may, then, have to face the problem of the author assuming I know much more about his or her city and its people than I do, but I have a feeling the characters might be a little more believable than they were here. I liked Renko, but he was still a bit flat after living with him for 365 pages, and who's ever heard of a flat Russian character? Give me some lively characters, and I'm sure I'll be turning the pages, dying to know what's going to happen, as afraid for those characters' lives as they are.
Posted by Emily Barton at 1:11 PM

How interesting. When I worked at the bookstore (full time years ago) I used to sell a lot of copies of Gorky Park. It was one of the backlist titles that always went. It's nice to finally know what it's about!

I read Gorky Park when it was first published. In fact, I'm quite sure I have a 1st edition sitting on my shelves somewhere. I can't remember the details very well, but I have the general feeling that I liked it. And you're right, who HAS ever heard of a flat Russian character. Never thought of it that way before, but you are right.

Carole, thanks so much for the recommendation. I'll have to check her out.

Litlove, yes, it was a very popular book back in the 1980s. I remember it didn't stay on the shelf long back when I worked at my first library job.

Grad, a first edition? Wow! Hang on to that. It's a very likable and interesting book, so I'm sure you did like it.