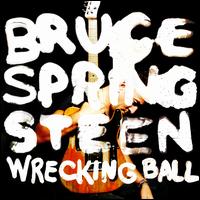 OMG! It's BRUCE! Bruce as you remember him, a vital member of the "Pit Crew" (or whatever the equivalent cheering section of your high school basketball team was), the guy who was singing "Born to Run" at that party where you got drunk for the very first time, the one who was crooning in the background when you finally made out with that guy (or gal, as the case may be) in the back seat of his newly-acquired, second-hand Honda Accord (or the back seat of your parents' station wagon. Whatever...). He's the same Bruce who followed you to college where you and your roommate decided "I'm on Fire" was one of the sexiest songs ever written and where you laughed at the buffoons who thought "Born in the USA" was a testament to Ronald-Reagan-style "patriotism."

He grew up with you, became politically aligned with you (or maybe it was that you became politically aligned with him). He protested the Iraq War with you, voted for our first Black American president with you, and now, all. of. a. sudden, you and he are back in high school again -- you, desperately wishing you could go to Asbury Park with him, even (shhh! Don't tell anybody!) wishing you were from New Jersey, and he with that familiar deep voice, those familiar guitar strings and piano keys and jingle bell sound. Which is not to say that this latest album of his isn't new and fresh.

One of the things that's always amazed me about Bruce Springsteen is that, no matter how distinct his sound, he is always evolving. He adds new instruments (bagpipes, for instance here), new sounds, goes back to his roots and shoots forward to a time we've yet to encounter (good old rock 'n' roll infused with something that steals itself from the rap music of today). This one, more than any of his other recent efforts, however, takes me back to a time when Springsteen on the turntable meant even wallflowers were pulled up from their seats and onto the dance floor. I want to dance. I want to stomp. I want to romp around the room when I listen to it. It's like being in an Irish Pub with or without the beer. And when you've been romping and stomping and sweating up a storm, here comes the ballad that causes everyone to raise mugs high and to sway.

That's what the music does. What the lyrics do is make me want to shout, "Rock on, Bruce!" Pay attention to them. Here, we have an angry Bruce (who says only young men get to be angry?). He's angry at what this country has become. Angry at corporate America. Angry about the death of "my hometown."Angry about all the things that make me angry and that should make all Americans angry, if only they'd wake up out of this country-wide stupor that has so many under its spell and take notice.

No unbiased review here, or seeking out something to criticize. I just love it. I unapologetically love it. If you're a Springsteen fan and haven't bought it yet, do. You won't regret it. I promise.
Posted by Emily Barton at 2:02 PM

Email ThisBlogThis!Share to TwitterShare to FacebookShare to Pinterest
Labels: Music

The Boss was on Jimmy Fallon's show a few weeks ago. Loved the songs from Wrecking Ball that he performed. Can't wait to buy this one.

You won't be disappointed when you do buy it!