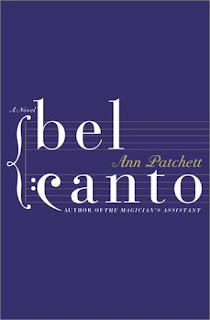 (I feel the need to add a disclaimer here. I have actually read more than six books in my TBR challenge. This just happens to be the sixth one on which I am writing a post. I decided to number them by post rather than order read.)

I've decided there is something wrong with me. I just don't seem to be able to get overly excited about the books that everyone else loves (which leaves me almost in terror of reading the new Jonathan Franzen). When I don't out-and-out dislike them, I often find my reaction is "meh."

If you've read much of this blog (especially my posts for this TBR challenge), you will know that I am convinced, in part, that this has more to do with high expectations than anything else. Of course, on some levels, that refutes another claim I've made on this blog, which is that I am highly impressionable. Given that, you'd think that I would love all the books that everyone else loves. Maybe my "impression-ability" stops with "I must read this. Everyone else loves it so," never making it to the next level of, "everyone loves it, and so do I." Or maybe, as I just said, there is something not quite right with me.

I have seen this book mentioned all over the place online, mostly with nothing but effusive praise and words like "hypnotic," "beautiful," "you must read," etc. Our library book discussion group read it before I joined, and they still get glassy-eyed when you mention it, saying things like, "I just wish we could find more books like Bel Canto to read." So I put this one into the TBR challenge absolutely convinced that I was going to love it. It was maybe going to be my dessert after struggling through one of those I'd expected would be more difficult and challenging (Portrait of the Artist as a Young Man, for example). I couldn't wait to read it, while at the same time, also feeling the need to "save" it, which I'd been doing ever since finding a cheap hard copy of it at the 2008 library sale.

Dislike isn't exactly the word I'd use to describe this book. Ann Patchett isn't a bad writer. It's just that I am on page 220, and the only reason I am considering continuing with it is that I have already put so much time and effort into it, picking it up time and again and trying to find its magic, when all I've really wanted to do is to get back to reading one of the other books I'm reading and enjoying. If I abandon it now, I'd have to admit to myself that I wasted a lot of time (something I am loathe to do). My biggest problem with continuing to read it is that my "Oh, come on!" (nasty, judgmental creature that she is) nature has been raising her ugly head over and over again.

Please don't accuse me of not understanding the obvious (although I would love it if you would help me understand the un-obvious -- help blind, idiot me see what I must be missing). I know that this book is really a fable, that it isn't supposed to be all about reality. I know it isn't really at all about people from all over the world held captive by terrorists in some unnamed South American country. I know it is about humanity and love and beauty and all that we humans have in common and how the arts can bring us together and triumph in ways that are miraculous, most especially how music can transcend all the worst in human nature, can soften us.

Not only do I know all that, but I also hate the old "it just doesn't ring true" cliche. Nonetheless, I keep following my "Oh, come on's!" with "That just doesn't ring true." My literal self -- the same one that loves good fantasy while struggling with it, especially if it doesn't take place in a different world -- has struggled throughout this book and really wants me to quit at this point, because I can't keep that self from asking, "What makes this American writer think she can know what drives a Japanese businessman? Or a Swedish Red Cross worker? Or a Frenchman?" Yes, the underlying human-ness, what brings us together, is there, but that's the bottom layer. What about the top layer? (And isn't it a cliche that the Frenchman is the chef? That the beautiful opera singer, despite being a woman, knows nothing about the kitchen and preparing food?) It's just too much (and, honestly, the writer in me thinks a bit arrogant) to think that anyone can realistically portray all these characters and others: the Vice President of this country; the Japanese businessman's translator, who is fluent in many languages; the female terrorist, born of extreme poverty. I don't mind if you give me unrealistic situations, but I want my characters to be real.

It isn't that I don't think an American writer could, say, take one of these characters (or even two of them), like the young girl who is a South American terrorist and make her real. Talented writers have been known to make very interesting connections and to give us amazing, believable characters whose top layers don't resemble their own top layers at all (Kazuo Ishiguro springs to mind), but to try to tackle so many in one book is just too much. It gets my questioning, doubtful mind spinning out of control.

I appreciate the fact I've given it a try. I'm glad I did, despite my disappointment. But is it worth continuing to anger all those multiple personalities of mine (Ms. "Oh Come On", Ms. Literalist, and Ms. Writer)? Anyone? Should I?

Hmm. You give me much to think about. I read Bel Canto when it first came out and I quite enjoyed it. I have an affinity for classical music so I enjoyed that part of the story. I have also gone on to read all of Ann Patchett's other books and have liked all of them in varying degrees. Having said all that I am wondering what I would think of Bel Canto if I read it again. I tend to be one of those "oh c'mon" kind of people but I don't think I have ever felt that way about Patchett's writing. You are kind of tempting me to read it again to see if I see what you see.

I have this to read and have been looking forward to it (and still am, never fear!). But it's always true that no one has yet produced a book that works for everybody. You gave it a good go, and if it's getting up your nose, I'd say put it aside and read something you love.

Thomas, well, I never thought I might actually inspire someone to reread the book! Maybe if you do, you'll be able to help me understand what I'm missing.

Litlove, sage advice. I think I'll abandon it (at least until you read and review it, which will probably guarantee my wanting to pick it up again).

Parallel lives again...I looked for this when I went to the library this weekend - now I'm not terribly upset I couldn't find it! I looked for it for all the same reasons...people talk about it everywhere online and I was convinced I would love it! I will probably keep a wandering eye out for it but perhaps won't rigorously look for it, since you and I tend to have the same taste...

Emily - I am one of those who absolutely loved Bel Canto, but I read it before all the ensuing years of hype and I might feel differently if I had picked it up with different expectations. That said, no, if you aren't enjoying it, give it up and read something you do like. There's a lot of unread books in the world (many in your house!). Give them a chance too!

I really loved Bel Canto, but I don't think it's one a person can be talked into liking or it's one that can be explained. You fall under its spell or you don't. I found it all very believable and well-done, but I suspect the whole thing bewitched me somehow so any stereotypes or cliches just disappeared.

Court, it's almost spooky our connection. Yes, I'd say, give it a go, but don't put your life on hold for it. I imagine you'll have the same complaints I do (or, at least, the writer in you will).

Ms. Musings, yes, I have put it aside. Way too many other books begging me to read them...

Dorr, I was hoping to be bewitched, too, but it just wasn't to be.

If you aren't enjoying it, time to let it go even with all those pages invested. Think at the remaining number of pages and consider what you could be reading and enjoying instead.

Emily, thank goodness I'm not the only one! I read this back when all the hype started and I seriously thought something was wrong with me- I just didn't get it. I think this was about when I started leaning more towards non-fiction, as I obviously wasn't deep enough to grasp what all the fuss was about.
Nope, give it up. Life is to short to read books that make you search for the magic...

Stef, yes, it was most definitely time to read something I enjoyed.

Linda, hmmm...maybe it's something in the water here in Paradise? Apparently, Dianne didn't much like it, either.