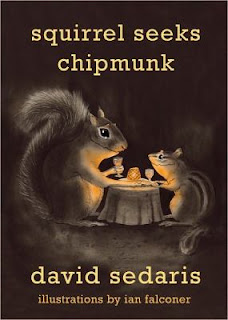 Are you the least bit surprised that I've already read this one, so hot off the presses I've had to put ice packs on my hands? It's much, much darker than Sedaris's typical collections and also, to some degree, more crass than he's been since his earliest works, but is he ever spot on. Talk about someone who really has his finger on the pulse of human nature (even if disguised as animal nature). Absolutely no one, it seems, is immune from his critical eye. This is the sort of book that ought to make everyone who reads it extremely uncomfortable because we can so easily identify our acquaintances...our friends...our relatives...ourselves.

People have complained to me that they don't see how I can like Sedaris because they think he's too cruel. Of course, my first response to that is, "Why shouldn't he be?" He grew up gay in North Carolina (granted, at least he was in the Research Triangle Area -- where, as a teenager, I was first introduced to uncloseted gays and gay culture -- and not somewhere like Mocksville, but still. It was North Carolina). He probably spent so much of his young life on the receiving end of cruelty that he has every right to be giving it back as good as he got (and while I am busy hugging cliches here, I might as well kiss "the pen is mightier than the sword" and all that). To think that he managed to keep a sense of humor growing up where he did does nothing but earn my admiration. To think that growing up where he did might have developed his sense of humor is probably why my long-time readers are rolling their eyes and thinking, "Oh God. Here she goes again, falling on her knees in front of the Sedaris altar." While I am down here on my knees, I will tell you that I've never really noticed the cruelty. Usually I've been laughing too hard.

This time, though, I was giggling, yes, but I wasn't rolling around on the floor in convulsions. That's what I did, years ago, when my sister said to me, "You must read Me Talk Pretty One Day," and I finally got my hands on it. (Incidentally, in case you ever find yourself in a room full of Michie siblings, there isn't one of us who won't engage in an "Isn't David Sedaris hilarious?" or "Did you read the latest Sedaris in The New Yorker?" conversation.) This collection of stories helped me understand why people might think Sedaris is cruel. His are not cute animals all singing "Kum Bah Yah" together while holding hands around the campfire, eyes closed, big grins on their faces, now that cat and mouse have decided they shouldn't be enemies. No, his animals are animals, and in being so, they clearly illuminate the sadness of what it is to be human. Give animals a few human traits, and instead of the absurdity that usually makes me laugh, I find a different kind of absurdity. It can be cruel to make us uncomfortable in the ways Sedaris does, to make us see an absurdity that might have us weeping if we dwell on it too long -- the ways in which we allow others to ruin our lives, or worse: the ways in which we systematically just go around ruining our lives on our own.

This is not to say that the book is nothing but a downer. I promise you. It is funny. You will love some of his characters (I'm partial to the chipmunk of the title and the owl of another one of the stories), but expect something a little bit different. And that's kind of a stupid thing to say, isn't it? I mean, of course it's different. David Sedaris doesn't usually write short stories about animals. (Or does he?)
Posted by Emily Barton at 10:38 PM

David Sedaris can do no wrong for me! I didn't realise he had a new book out - amazon here I come....

Cruel? I've never for a second thought that Sedaris wrote in any kind of cruel way, I just don't understand that criticism. Are those people confusing healthy cynicism with cruelty?

Haven't read this one yet but I heard him read one of the stories on "This American Life" and loved it.

I was wondering if you'd read this yet! I am looking forward to it myself although I am not as big a fan of his "crueler" works in Me Talk Pretty One Day. I particularly liked "When You Are Engulfed in Flames" because he spent more time making fun of himself than in other works. But ultimately, any David Sedaris, is good David Sedaris!

I've been wondering about this one and should have known you'd be reading it as soon as it hit the bookstores. It's probably going to take forever to get it from the library but I am glad to know the wait will be worth it!

I also didn't realize he had a new book out, I'm going to have to get it right away. Love his humor and can't wait to see how he manages the animal stories.

Litlove, ooo, can't wait to hear your take on it!

Danny, yes, they just might be confusing healthy cynicism with cruelty. I'm sure you'll love this little collection once you read it.

ZM, like pizza, no? Even when he's not at his very best, he's still good.

Stef, it's very short. Even I, the world's slowest reader, managed to finish it in a day, so maybe you'll get it sooner than you think.

Verbivore, you won't be disappointed.

I think he needs to let memoir cool down after six of them. (If you count The Santaland Diaries section of Holidays On Ice)

I've never thought he was particularly cruel and I've just been criticizing Frank Zappa (who's dead and can't retaliate) for cruelty.
For me I think the difference is that David Sedaris is unpresupposing. He punches up. Zappa punched down. (Which is why John Denver was a much more compelling witness in the PMRC hearings)

I've never thought of Sedaris as cruel, either. Just ... realistic, which is why he's so funny. I kind of like the idea of a book of his with a sharper edge to it. It sounds good.

Nigel, I know. Funny you were writing about Zappa's cruelty while I was writing this, and when I read your post, it made me wonder even more how people can think Sedaris is cruel. I agree wholeheartedly: Sedaris punches up. Zappa punches down.

Dorr, it IS good (but do you really trust that judgment coming from this Sedaris freak? :-)! You'll have to read it and see for yourself).