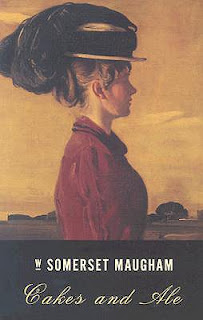 (Before I get started, thanks again to those of you who helped rescue me from Thornfield. I am now safely home, and Jane Eyre is back in her rightful place on the shelf.)

Boy, do I love Somerset Maugham. I loved him when I discovered him when I was nineteen or twenty, first reading Of Human Bondage, which a guy I had a crush on back then gave to me to read and which led me to read everything else I could find in our house that summer. My mother has always described to me the summer she was fifteen, when she was living in Bermuda with her parents and "spent the summer drinking Coca-Cola, reading Somerset Maugham, and pining away over boys who couldn't care less about me" (seems appropriate, then, that I discovered the author while pining away for a boy who couldn't care less about me), so we had a nice collection of his books in our house. Oddly enough, what I don't remember is what I did and didn't read of his back then, so everything I read now is as if I've never read him. When I pick up one of his books, I get a sort of sense of things being vaguely familiar, as though I am unpacking a trunk marked "Maugham," but everything that's in it, despite the trunk's well-worn appearance, is all shiny and new.

Anyway, all this is to say how lovely it was to pick up a book off my TBR challenge shelf and not to be able to put it down. Last time I wrote about Mauhgam, I talked about how he has this gentle way of pulling you in, making you think you're nibbling at a gingerbread house, and then, suddenly, you find yourself turning page-after-page to get to the end, trying to escape the horrible witch and her oven, hoping you can get out of this with your heart beating regularly, still in one piece. He did it again with this one.

Where to begin with all I have to say? I suppose I ought to start with the fact that if ever a book could lead a reader to other books, this one would be it. Not only does the reader find herself thinking she'd like to get some good biographies of the fictionalized characters (more on that in a minute), not to mention of Maugham himself, but she also finds herself needing to exercise a little restraint. Maugham name drops left, right, and center, and without said restraint, the reader could easily come away with a whole new chapter of the TBR tome entitled "Writers of the Cakes and Ale Era."

For those of us who love to read and who work in publishing, this book, which is getting up there in age -- closer to 100 now than 50 -- is both enlightening and discouraging, both fun and sad. Why? Because it very effectively highlights how readers, writers, and publishers (oh, and human beings in general) have and haven't changed. You could take quotes verbatim from this book, substitute authors' names, plop them down in 2010, and people would nod their heads in agreement, quotes like this one that our narrator makes about his acquaintance Roy Kear,

I could think of no one among my contemporaries who had achieved so considerable a position on so little talent. (p. 4).

Can't you just hear one of today's mid list (such as it is in its vanishing state) authors saying something like that about one of those who shows up time and again on the bestseller lists? The book offers such observations from the beginning and hands them out all the way to the end. Maugham often gives us long passages of such opinions because he was a Master of Digression.

His digressions are one of the other reasons I love him so. They don't annoy the way less talented writers can with their complete non sequiturs. They are extremely wry and never take away from the story. Rather, they give the air of just being one of the characters in the book, sitting round the dinner table with the other characters and joining in the conversation with their thoughts and musings.

And what is the essence of this story? The great Victorian novelist Edward Driffield has a new biographer Alroy Kear. Our narrator William Ashenden happens to have known Driffield when Ashenden was a teenager and Driffield and his wife (at the time) Rosie moved to Ashenden's village in Kent. The young Ashenden was befriended by the writer and his wife. They later pick up their friendship again when they are all living in London together and Ashenden is becoming a writer in his own right. Now that Roy Kear is writing Driffield's biography, all these years later, he is pumping Ashenden for information, information Ashenden is reluctant to give. I won't say anymore, so as not to throw out spoilers, but suffice it to say that, in typical Maugham fashion, there are scandals, and shocking revelations, and biting commentary on British social norms, all served up with your cakes and ale, in a manner that makes them all even more page-turner-worthy because you are so often taken off your guard while eating and drinking such classically comforting fare.

Apparently, Maugham swore that his characters were mere composites of authors he'd known, but nobody believes that. Kear is generally believed to have been Hugh Walpole. Driffield is Thomas Hardy.

While reading the book, I began to think an awful lot about Hardy and Tess and Rosie Driffield. Rosie and Tess, although on the surface two very different women, are -- in some ways, at least -- very similar. They are two women damned by their stations in life, both by having been born into their particular social classes and by having been born female. Yes, things were bad for men, too, but women got the worst of it. Poor Tess, a woman who was full of heart and soul, is ruined by a man and has all choice removed from her life in a society that cannot understand her. Poor Rosie, a woman who is full of heart and soul, is also ruined by a society that cannot understand her, one that is so repressed, it can't bear anyone who chooses not to be. Both of them know that to behave in ways for which a man might be forgiven means never to be forgiven.

So, you can't convince me that Edward Driffield isn't Thomas Hardy. Maybe Maugham did it subconsciously. Perhaps he was unaware of the fact that Cakes and Ale was a beautifully clever, modern rewrite of Tess of the d'Urbervilles, but somehow, I doubt that.
Posted by Emily Barton at 4:58 PM

I'm a huge fan of Somerset Maugham too, and would reread this one myself, if the right moment came. There is something so easy about his style that draws you in and it's the characters, too. He spends so much time on fleshing them out and they become so vivid in the imagination. Oh and I spent a LOT of time in my teens pining over boys who couldn't have cared less about me - yup, know all about that! :-)

I've only read Razor's Edge and I liked it very much. This one sounds like great fun. I'll read it eventually I'm sure!

I've come to admire Maugham as well, although The Razor's Edge did not work for me. But Of Human Bondage and The Painted Veil were both great. I'm looking forward to getting to this one! Now that I think about it, I don't have an unread Maugham on my shelves, which is not good ...

Litlove, yes, I am sure that one of the reasons I so love Maugham was his ability with characterization. And I am glad to know I am not the only one who seems to have wasted a good deal of her youth pining over those who couldn't care less about me (made us stronger, right?).

Stef, I'm pretty sure you'd love this one.

Dorr, what? All those used bookstores over the weekend, and you didn't pick up a single Maugham? You must go back.

I'm currently about 3/4 of the way through The Razor's Edge and enjoying it. I'm adding Cakes and Ale to my list. Thanks.

Denise, and I've now got The Razor's Edge on my list.