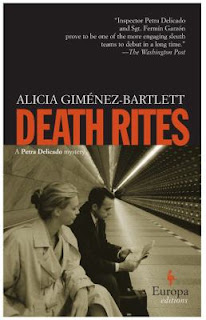 Well, this is definitely a first for me. The Connecticut mystery book club was formed three years ago, and I have never not finished a book for the club. I may not always have gotten a book read on time, but I have always finished it. However, I am in a very strange period (for me) in my life in which I am extraordinarily busy, barely have a moment to myself, and I just don't seem to be able to bring myself to devote a lot of time to reading anything that does not have me spellbound. This one didn't. (In another first, this is the second book in one week that I have decided to abandon. I'm pretty sure I have never given up on two books in one week, being someone who, for the most part, perseveres).

Up until yesterday, I didn't think I was going to abandon it. I was pretty sure I was going to finish it and post my reactions sometime next week, even though the group is meeting to discuss it tomorrow. However, I had to go to the library today to pick up a book that was being held for me, and before I knew it, I had picked this up and brought it with me to return. I guess some part of me knew that now just wasn't the right time for this particular book.

I feel kind of sorry for it, because it isn't as though I really disliked it. I was a little annoyed by the writing style, which seemed overly fragmented and disjointed to me, but that could very easily have been the translator's fault as much as anything, and I soon found I got used to it (although I did wonder, at times, if Gimenez Bartlett was trying a little too hard to imitate the American "hard-boiled" feel and failing). The plot was definitely one that should have grabbed me (a serial rapist is on the loose in Barcelona, Spain, and two unlikely members of the police force -- one, a twice-divorced feminist lawyer-turned-police woman, and the other, a laconic, somewhat sexist -- at least, she's convinced he is -- "seasoned" cop are thrown together to solve it).

If I had stuck with it, I might have discovered that I liked it very much. Petra (the woman) was annoying at first, but she was growing on me. Garzon (the man) seemed to have a lot of surprise characteristics, and he was growing on me even more than she was. I was interested to see how these two would end up working together. On the other hand, though, I already knew, without reading it, that she was going to come to quit judging him so harshly, to begin to see him in a new light, and to come to respect him, so why bother to continue reading to see what happened between the two of them? Well, maybe because I was interested to see exactly how she would come to see the light.

Apparently, though, not interested enough. Otherwise, I would have stuck with it. What else was and is interesting to me was the almost "in-your-face" feminism of the book. Petra is very determined to "fight the good fight" for women, no matter the consequences. This is the second European book I've read this year that has made me question some of my beliefs about European countries and their attitudes toward women (the other was The Girl with the Dragon Tattoo). For some reason, I have assumed that, when it comes to Western culture and countries, America lags behind in its treatment and attitudes toward women, that we have farther to go than most, especially when you compare us to all our friends across the Atlantic. Don't ask me where I got this assumption, and I will say that the world of blogging had already got me to start rethinking it before I read these two books, but these two books certainly have helped open my eyes quite wide. The world Gimenez Bartlett has given us -- at least in the first half of this book -- is truly a man's world, so much so that young women being raped might not even be as bothered by it as one might expect them to be). This was enlightening, but still.

I quit about halfway through the book. No one had yet found a dead body, but, if this mystery were true to form and followed proper procedure for the genre, one was bound to turn up sooner or later. It might have been interesting to find out who that was. Might have been, but, obviously, not quite interesting enough...

It makes me uneasy to say this, but I have yet to read a Spanish novel and enjoy it. I've abandoned pretty much everyone I've tried, on the grounds that they were melodramatic and yet seeming to lack real emotion, and confusing in a messy sort of way. But there MUST be fantastic Spanish authored books out there?

And America was ahead of all other nations in legislation concerning womens' rights. You were holding consciousness raising meetings and marching for equality in the 60s, and Europe caught up in the 70s (although some areas lagged further behind). However, if you look at things on an individual level, you can probably find misogynistic attitudes and behaviours across both our countries still. We can always push further on this issue (as I know you think, too).

Litlove, well, I haven't tried to read many Spanish books, but I do so love Don Quixote, so maybe it's more to do with contemporary Spanish writers? And, yes, we definitely all need to keep pushing, no matter where we live.

I agree with you about the book. Your phrase "not quite enough" gets it just right. There were interesting elements here, but they didn't come together. The main character never quite came to life and the plot felt odd and at times a little dull. I, too, liked the feminist aspect; I think that was one of the best parts. The group as a whole didn't like it, and we spent a long time complaining about the translation and wondering how much at fault the translator is. It's hard to tell. So, a disappointment. I started off liking it, and there were moments later when I liked it, but overall, not really.